Why was a minimum wage system introduced by the government?

When our government introduced the National Wages Consultative Council Act 2011, it was intended to address the low wages prevailing in the country, especially in the private sector. Employers were then paying very low basic pay not only in the Klang Valley but throughout the country. Under this act, the Minimum Wage Order 2012 was introduced, establishing a minimum wage of RM900.

The underlying factor for the government in introducing the minimum wage order was to mitigate the unfair low-wage system prevailing in the country. It was a case of government intervention when the employers failed to pay equitable rates of pay, thus driving wage levels in a race to the bottom!

Fast forward to 2021 and what we need to ask is whether the minimum wage system is still relevant given that wages, even for degree holders, have been compromised due to the weak labour employment market.

Unemployment among the youth in 2020 terms was estimated to be 11.7% whereas total unemployment was hovering around 4.8%. Even more alarming is that about 70% of jobs seekers were youth, according to a report published by the EIS-UPMCS Center For Future Labour Market Studies.

According to a Ministry Of Higher Education survey, about 10% of fresh graduates were paid between RM1,001 and RM1,500 a month since 2010. The survey also found that in 2020, more graduates fell into this income bracket reaching a decade-high 22.3%.

Low wages, by any standards, are an indication that our young workers are being exploited due to the prevailing depressed employment opportunities.

The study is based on what is termed as a “living wage” – a living wage is defined as the minimum income necessary for a worker to meet his or her basic needs including food, housing and other necessities.

On the other hand, a minimum wage is set by the government with the aim of protecting workers against unduly low pay.

Given the 2018 Bank Negara study, the truth is that middle and low-income workers are not earning enough household income to sustain themselves. So, workers are forced to work excessive hours of work – working overtime, working on rest days and public holidays, and even working a second job to supplement their household income.

Working prolonged hours and, by extension, enhancing production for employers, results in the deterioration of the workers’ physical and mental health.

Working long hours of work is as good as modern-day slavery: in the absence of decent, sustainable wages for an eight-hour work day, workers are forced to supplement their incomes by working excessive overtime, working on rest days and public holidays and even taking on a second job.

So is the existing minimum wage system still relevant under the circumstances?

Prof Yeah Kim Leng from the Sunway University Business School feels that, given the Bank Negara study 2018, workers will need a side income to make ends meet on a minimum wage of RM1,200. (Free Malaysia MT 28.10.2019).

It is, therefore, apparent that workers cannot survive on the current minimum wage of RM1,200 a month.

Given this reality, we need to deliberate whether we need to shift from a minimum wage system to a “living wage” module.

The existing National Minimum Wage Council ought to be rebranded to a “national living wage council” with the absolute power to decide on a “living wage” rate of pay without being subservient to the government.

As no wage system can remain stagnant, a bi-annual revision of the living wage – like the existing mechanism for the minimum wage – ought to continue.

Correlation between rate of unionisation and wage inequality

In Malaysia, it is an indisputable fact that existing labour laws impede organising efforts by unions.

If the EIWU had been accorded the right to organise workers in the electronics sector, the chances are that wage inequality could have been addressed substantially in that sector, which employs thousands of workers.

But the government did not permit the EIWU to organise these workers so as to suppress the numerical strength of the EIWU and, in the process, perpetuate wage inequality in the electronics sector. Ultimately, the government’s ploy was to dilute the unionisation of these workers into a regional demography.

It is thus obvious that a fundamental flaw in the country’s income inequality lies in the correlation with the rate of unionisation in the country.

Where unionised workers are covered by collective agreements, which provides for salary adjustments once in three years, about 93% of the unorganised workers are left to the whims of their employers in granting such periodic salary adjustments. And where unionised employees are entitled to annual salary increments, by virtue of the collective agreements that are in force, 93% of unorganised workers have no legal right to demand such annual increments from their employers.

Under the circumstances, the trade union movement has to pursue a transformation of the existing repressive labour laws so as to provide a conducive legislative ecosystem that would promote the unionisation of workers.

Economist Shankaran Nambiar from the Malaysian Institute Of Economic Research, while agreeing that the current minimum wage cannot meet minimum living standards (of the civil servants), felt the government should wait for the economy to improve before raising the minimum wage.

That proposition is devoid of any justification for the simple reason that the government is under an obligation to address the existing income disparity to ensure that civil servants are paid an acceptable living wage. And, by extension, a living wage should also be implemented for private sector workers.

In parting, the government must accord Cuepacs the right to collective bargaining, under International Labour Organization Convention 98, read together with Convention 154.

So, what position should the labour movement take under the circumstances?

First, the labour movement has to relentlessly pursue a transformation of the embedded pro-employer labour laws. We need to continue our struggle to ensure that the government conforms with the core ILO labour standards such as Convention 87, 98, 154 and 190.

Second, we need to pursue a holistic realignment of the socioeconomic policies of the government that has given preference to employers and which have margainlised both the working class and the trade union movement.

Thirdly, we need to demand that the outdated minimum wage system be recalibrated to a living wage module based on the 2018 Bank Negara study. 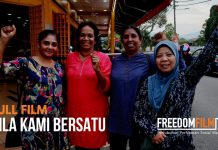 I sympathise with those surviving on a minimum wage . At the very least, they are gainfully employed as compared to those not employed.
Yes, they may have to work a second or even third job but beggars cannot be choosers.
So to talk of a living wage now is meaningless.