The Tanjong Bunga Residents’ Association (TBRA) states categorically that Penang’s northern beach-front residential area, Tanjong Bunga, should be in the lower-density Secondary Development Corridor and that this is clearly supported by the text within the State Structure Plan, which was gazetted in June 2007.

Overview of the problem

The TBRA knows that there is an obvious inconsistency or error in the State Structure Plan as gazetted in June 2007 and this error or inconsistency was made either due to negligence or on purpose by the previous state administration in order to enable nearly unrestricted development in Tanjong Bunga (as allowed by the Primary Development Corridor).

Herein lies the problem. Do we go with the text or the diagram?

Cause of the inconsistency

TBRA takes the opportunity to inform and reiterate that during the display for public feedback of the State Structure Plan in 2006, the text and diagram were consistent i.e. both showing that the Primary Development Corridor was from Georgetown to Tanjong Tokong and that Tanjong Bunga was in the Secondary Corridor. However, for reasons known only to the State Planning Committee at that time, it decided unilaterally on 12 February 2007 to change the diagram to what it is today, different from the text.

Thus TBRA states that the change by the State Planning Committee in Feb 2007 is irregular, if not illegal, and thus not valid as the display of the plan for public feedback in 2006 was of the old correct diagram, and then it was changed unilaterally by the Committee, with no opportunity for the public to give or obtain  feedback.

TBRA also points out that the current State Government did on 19h December 2008 approve the Structure Plan, and, it would seem, with the comments of YB Chow in The Star on 28 Aug 2009, that they are now giving precedence to the diagram over the text.

Reasons for opposing Tanjong Bunga falling in the Primary Corridor

TBRA calls upon the current State Government to correct a blatant wrong as committed by the past government, i.e.  to acknowledge this error and  to rectify it in the Structure Plan and follow through in the drafting of the Local Plan.

A. Roads
The roads leading into & out of Tanjong Bunga are few and will not be able to take the huge volume of traffic should large buildings bring in the population. Traffic jams and grid locks would be inevitable. This is already happening during every holiday season when large numbers of cars come into Penang and head towards Tg Bunga and beyond.

Moreover, the existing land space cannot accommodate new roads unless heavy infrastructure work is carried out to cut hills and landfill the sea to build major new roads.   This in turn would cause even more environmental degradation which TBRA is already struggling to stop.

Numerous hills are already being cut causing the exposure and existence of Class III and Class IV hill slope everywhere in Tanjong Bunga. These slashed and bare hill slopes are of major concern to residents in Tanjong Bunga as they may cause land slides and lead to loss of life.  This is made worse by the fact that there is no authority to monitor and manage all Class III and IV hillslopes in the country once development work is completed.

The cut hills are causing serious erosion with mud and silt being washed into our seas every time there is a downpour of rain. Our beautiful white sand beaches in Tanjong Bunga and Batu Ferringhi are already becoming golden “muddy” brown. Large parts of the seas at every river mouth turn the colour of “Teh Tarik” at each downpour. This is already causing our tourism industry to suffer. Jobs will be lost.

C.Water and electricity and communication

The water pipes, electrical wiring and telecommunications cannot cope as it is. The strong water pressure of Tanjong of yesteryear is a thing of the past. Water pressure in Tg. Bunga is going the Petaling Jaya way, that is, poor water pressure.  Illegal piping and wiring are already being laid in drains and along roadsides instead of being strung up or buried under roads.

There are no hospitals nor large post offices or government offices, no fire brigade, nor sufficient schools to cater for the high population growth should Tg Bunga be made into a Primary Corridor.

These are the facilities available in Tanjong Bunga today:

Both these roads are already jammed during peak hours and holidays at the bottlenecks of Bagan Jermal.

If Tanjong Bunga is put into the Primary Corridor, it will open the area to many development projects which, while causing all the above problems, will be at the cost of public money, and of gain only to a few “selected” private individuals.

Because of the above reasons, TBRA is vehemently opposed to putting Tanjong Bunga in the Primary Corridor and insists that its town remain in the Secondary Corridor so that the problems raised can be avoided.

TBRA’s position on the Corridor Status of Tanjong Bunga is not new and does not involve legal suits.

Already in April 2008, TBRA sought clarification from the Jabatan Perancang Bandar dan Desa and as of May 2008, TBRA and other resident groups referred this matter to the Honourable Chief Minister and to YB Liew Chin Tong.   This must not be confused with any threat of suing the State Government, as has been wrongly reported.

The letter issued to TBRA by the Jabatan Perancangan, dated 29 June 2009 supports the contention that the change in diagram occurred on 12 Feb 2007 when the State Planning Committee decided to put Tanjong Bunga into the Primary Corridor. TBRA maintains that this is not in conformity with the provisions of the Town and Country Planning Act, as it involves a change of the State Structure Plan which was gazetted before.

Whatever the reasons are for the difference between diagram and text, it is the contention and stand of TBRA that the text takes precedence over the erroneous diagram on Page 4-4b of the Structure Plan as the drawing of the diagram is totally unreliable and blatantly irregular for the following reasons:-

Apart from the erroneous sketch map, there is nothing whatsoever in the written statements/text of the Structure Plan which suggest that the Secondary Development Corridor is from Mar Vista to Telok Bahang.

Furthermore, as stipulated in the Town & Country Planning Act 1976, the Structure Plan contains written policy statements while the diagrams or sketch maps are merely for illustrative purposes only. Hence, the sketch maps cannot override the clear and unequivocal statements of the text.

Finally, as the diagram was amended unilaterally by the State Planning Committee after the public consultation and display period, with no further feedback by the public, this diagram is thus irregular and cannot take precedence over the current text which puts Tanjong Bunga in the Secondary Corridor. Our understanding is that all changes must be published and made known with adequate notice to the public for feedback and to make representations, and this was not done.

Indeed TBRA, which represents the interests of all residents in Tanjong Bunga, is saddened to note that according to YB Chow’s press statement, as reported in The Star on 28 Aug 2009, the current State Government seems to be following the irregular diagram and ignoring the text of the gazetted Structure Plan.

TBRA now calls upon the current State Government to correct a blatant wrong as committed by the past government, i.e. that it acknowledges this error and undertakes to rectify it in the Structure Plan and follow through in the drafting of the Local Plan.

This is necessary to ensure that all decisions made by the State Planning Officers are guided accordingly by this amendment. As such the forthcoming Local Plan needs to show that Tanjong Bunga is in the Secondary Development Corridor and that all future development projects and decisions must then be within the guidelines limiting the number of units of houses/homes to a maximum of 15 units per acre.

Failure to undertake this revision of an earlier error would mean that the current State Government is intent on confirming the error or/and aims to mislead the public by following the old State Government’s use of an irregular diagram that does not conform to the text within the gazetted State Structure Plan.

TBRA appreciates the comments noted by our Chief Minister in theSun of 8 September 2009 stating that Tanjong Bunga will not suffer the pain of the New Housing Policy which has increased the density of housing projects. Nonetheless, this announcement only confuses the entire issue. Since Tanjong Bunga is in the Secondary Corridor in the text of the Structure Plan, no New Housing Plan can be implemented in violation of the Structure Plan to increase density as there is already a limit of 15 units per acre.

TBRA calls upon this Pakatan Rakyat State Government to do the honest and honourable thing to correct a wrong (or a deliberate attempt by the previous state government to confuse the public), by placing Tanjong Bunga in the Secondary Development Corridor in the forthcoming Local Plan thus giving precedence to the text in the Structure Plan instead of the irregular and unilaterally altered diagram as undertaken by the State Planning Committee in February 2007.

for and on Behalf of the TBRA Committee 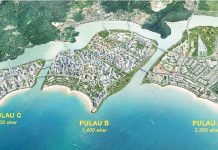