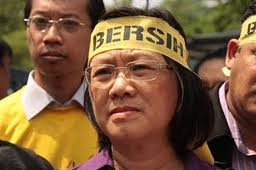 The Joint Action Group for Gender Equality (JAG) strongly condemns the sentence given by the Federal Territory Sharia High Court to Maria Chin Abdullah, the Petaling Jaya MP, of seven days in jail.

The sentence, issued for a public statement Maria made regarding the court’s decision to impose a jail sentence on Emilia Hanafi, formerly married to SM Faisal SM Nasimuddin, the Naza group chairperson, is disproportionate and clearly unreasonable.

Emilia, a survivor of domestic violence, divorced SM Faisal in 2016 and retained custody of their three children. In October 2018, she rescheduled SM Faisal’s visitation dates for her children, as she was out of town with her children for a religious event.

Despite maintaining that she did not deny her ex-husband visitation rights or violate any court orders, a seven-day prison sentence was imposed on her.

As an MP, Maria has both the right to freedom of expression and the duty to address injustice and inequalities, including that which takes place through any legal system, Shaira or civil. Maria is one of the beacons who speak for gender equality and women’s lived realities, and her role should not be undermined.

Prosecuting Maria is not only oppressive and appalling, but it also serves as a form of intimidation, a consistent pattern of silencing women who have faced injustice as a result of legal and religious interpretations of the law.

Support the struggle to build a Malaysia based on Justice, Freedom, Solidarity:
READ MORE:  Leaving 2021 with a dearth of humanity

While we welcome the decision of the Federal Territory Sharia High Court to suspend the sentence on Maria Chin Abdullah pending appeal, JAG stands in solidarity with Maria Chin as freedom of expression and speech is enshrined in our Federal Constitution under Article 10(a) which states that “every citizen has the right to freedom of speech and expression”.

Other organisations and individuals: