Save Malaysia, Stop Lynas is deeply disappointed with the Pakatan Harapan (PH) government’s decision to extend Lynas’ waste storage licence given the hazards of its wastes.

We are alarmed by the sheer volumes of waste generated so far. Apparently over 450,000 tonnes of the most toxic of Lynas’ wastes has been left near the Lynas Advanced Materials Plant (Lamp). If this is the case, then there will be over 880 tonnes of thorium in the mix.

In any country with a responsible government, the refinery would have not been issued any licence to construct the plant, let alone generating so much waste contaminated with radioactive thorium, toxic heavy metals, chemicals and compounds which Lynas has not fully disclosed. Even China has better standards since 2010 than Malaysia in managing and regulating its rare earth industry.

Many of us felt cheated after voting for the PH government thinking that it would make a real difference and make our future safer and cleaner.

Here are the standards China now observes for its rare earths industry: It has very clearly defined standards for their effluent discharge as well as solid wastes measured in molecular terms. Each of the chemicals inherent in the effluents and solid wastes is systematically listed and classified according to its toxicity to the waterways and soil.

Here, every time we breathe in the air, we have no idea if Lynas’ thorium will be in the air, in the water we drink or in the food we eat.

Every day Lynas is allowed to operate without a safe storage facility for its toxic waste, our health is put at risk by firstly, the Najib’s government’s decision to allow Lynas into Malaysia and now, the PH’s government’s failure to do something about that decision, which allows another toxic legacy to happen at our doorstep.

Internationally, 1Bq/g (Becquerel is the SI-derived unit of radioactivity) is the limit of radioactivity for this kind of waste to be exempted for radiation safety control. Lynas’ water leached purification residue (WLP) is eight times that limit, and our government believed in Lynas’ spin that low level radioactivity is safe.

We cannot accept this and we will continue to fight for our safety and that of future generations’ since thorium has a 14 billion-year half-life. We cannot tolerate a known carcinogen – cancer causing substance – to be piled up high so close to a populated area, fishing grounds and agriculture area.

In a decent civilised country, the government would not have tolerated the way Lynas has been dumping its hazardous waste in the open where thorium has been carried far and wide by the wind and rain. More so when we have the annual North Eastern monsoon winds and rains.

The people of Kuantan placed high hopes on the newly elected PH government to correct the wrongs that the previous Barisan Nasional government committed especially with regard to Lamp.

Failing to act in the best interests of the people will render this government akin to the previous one, and people will not forget how they have been double-crossed.

Tan Bun Teet is chairperson of the Save Malaysia, Stop Lynas campaign group. 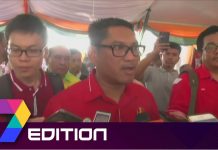 I see the pro-Lynas propaganda boys are back in action in the comments here to defend their favourite polluting “investment”.

The SMSL campaign is an absolute disgrace. No facts, only disinformation and scaremongering tactics to confuse the people. The NUF residue has been tested by internationally accredited laboratories and found to be non radioactive, non toxic, non eco-toxic, its basically as harmful as normal soil. The WLP residue is the same only contains naturally occurring radioactive material. Lynas has fully disclosed the composition of the residues and if Tan Bun Teet paid attention when he visited the LAMP he would of know that. Regardless its been published all over the media. The level of ignorance being displayed by the anti Lynas folks is embarrassing for Malaysia.

pH people are interested in taking over the government and make money for themselves , they support anti Lynas campaign then because it will tamper the the BN image. The comment? both BN and pH are the same controlled by the very same people only change hat.next PRU kick both out

Disgusting. There’s plenty of empty desert in Western Australia. Why didn’t Lynas store its waste there, instead of dump it here in Malaysia. The PH government should have told Lynas to go store its waste in its own backyard, not here but I suppose that with Pahang being a BN controlled state, the PH federal government allowed the extension.

Then again, perhaps the gahmen needs the moolah to pay off the RM1 trillion debt. In that case they will let Malaysia become the dumping ground for waste plastics.

What next – legalise prostitution, ganja and ayahuasca to earn tourism revenue?

Lyans never wanted to dump anything in Malaysia, Lynas want to recycle the residues into fertilizer that can then be shipped to other countries including Australia but the PH government dont want that, they want Lynas to store the residues in Malaysia as waste.

All experts, local as well as international regard Lynas as a very save operation that does no harm to anyone! Why are you still misleading the brave people of Kuantan who mostly are happy to have such an international high standard high tech plant?

when was this photo taken?…now where got so many anti-lynas…

Blatant propaganda without a shred of truth, simply draws Aliran into the gutter with the self serving activists who care nothing for Malaysia’s future.
As a Lynas investor who has visited Kuantan on four occasions I have confidence the people of Malaysia will see through this charade and realise the benefits Lynas brings to the future prosperity of the country, in a clean, ethical manner.

Very long story. This will go on for next 50 years.

ABOUT US
Aliran is a reform movement in Malaysia promoting justice, freedom and solidarity.
Contact us: aliran.malaysia@yahoo.com
FOLLOW US
Content may be reproduced without alteration but please attribute to aliran.com
wpDiscuz
11
0
Would love your thoughts, please comment.x
()
x
| Reply