The date 8 October 2020 was a dark day for women in Sabah as their status and position in the state reached rock bottom. As a women’s rights group working for the advancement of women in Sabah since 1986, the Sabah Women’s Action Resource Group (Sawo) is angry and disappointed that there are no women ministers in the new Sabah cabinet.

All of the positions are taken up by men, including the social development portfolio, which is usually the token position given to a woman politician.

During the previous Warisan-led government, a woman politician was appointed as a deputy chief minister as well as the minister of tourism, culture and environment. This was considered by some quarters to be a vast improvement in the position of women in the state cabinet.

In this new Gabungan Rakyat Sabah-led cabinet, women are now not even considered qualified enough to handle social development issues in the state. Women have no place in the highest decision-making body in the state.

Women’s representation in the state legislative assembly has been decreasing over the years and is now less than 10%. Sawo, together with other groups, has urged the government to improve this pathetic and unjust situation by appointing women into the six nominated seats.

In a country that practices the democratic electoral system, the individuals who deserve to be the nominated state assembly members should be individuals who stood in the just completed state election. The six best losing women candidates very much deserve to be appointed as nominated assembly members because they actually ran for the election and captured between 35% and 42% of the total votes cast in their respective constituencies.

Instead, five men and one woman who did not even stand in the previous election were appointed. To add insult to injury, a Pas member whose party did not even compete in the election was also appointed. We call upon all those appointed to show a sense of fair play and justice to resign and make way for the six best losing women, who had the guts to stand for election and did pretty well at that.

It is ironic that male politicians have to resort to being nominated members of the state assembly when they dominate the political arena. Nominated seats are a form of affirmative action to ensure the inclusion of all communities to reflect the diversity and multiculturalism of all Sabahans. So if women are marginalised in the assembly, they should be nominated – not more men!

The message of this GRS-led government to Sabahan women is loud and clear. They think that Sabahan women are not good enough nor capable enough and do not deserve to sit at the table together with male leaders to govern the state.

In this 21st Century, women all over the world are taking their rightful place in leading their communities and countries. The question of whether women are capable of leading is no longer an issue.

But in Sabah it seems that women are still far from achieving this status. This is such a shame because when women are empowered, the whole of society, including families and communities, gains.

Moving towards a more gender-sensitive Parliament 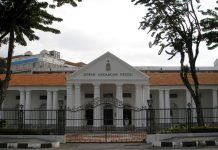