Women’s advocacy group Sabah Women’s Action Resource Group (Sawo) fully supports and urges the government to consider recommendations by the Coalition for Clean and Fair Elections (Bersih 2.0) on public funding of political parties with an annual total of RM133m in direct funding.

Parties should be funded directly and indirectly by government to reduce parties’ dependence on private funds and subsequently disproportionate policy influence by the rich.

In particular, Sawo applauds the second recommendation in the Bersih 2.0 study “Public Funding of Political Parties in Malaysia: Debates, Case Studies and Recommendations” that RM10m should be provided for all parties that succeed to elect at least one woman parliamentarian, proportionally divided among the parties by women-held seats and earmarked entirely for parties’ expenses in promoting women’s participation in politics.

Sawo believes it is imperative for governments at all levels to increase the percentage of women decision-makers in all bodies, including legislatures and cabinets.

Women’s representation has seen a very slow growth in all levels of government, with only 14.4% in Parliament today. It is shameful that Malaysia ranks 142nd out of 190 countries surveyed by the Inter-Parliamentary Union (IPU) in this regard.

We at Sawo truly believe that providing financial support to parties with women MPs is the key to raising women’s participation in politics, which in turn, can improve our country as a whole. We call upon the four women MPs from Sabah (Noorita Sual, Christina Liew, Vivian Wong and Isnaraissah Munirah) to advance this call to their parties and in the next parliamentary sitting.

If the federal government is not keen, Sawo would like to call upon the Sabah state government to be a pioneer and introduce such a special fund – even with a much smaller amount, say, RM1m – for all parties that succeed in electing at least one women state assembly member in Sabah’s next state election.

Public funding in Australia started in the state of New South Wales before the federal government followed suit. Sabah can be Malaysia’s New South Wales.

With such funding, parties would be incentivised to field more women candidates in winnable constituencies. A vast improvement in women’s representation in the Sabah Legislative Assembly is badly needed as only seven assembly members in 2018 out of 73 elected members, or 9.6%, are women, ranking the state eighth amongst Malaysia’s 13 states.

Sawo believes it is time for our Parliament and state legislatures to achieve a more balanced representation. Better representation of women can allow for more growth in various areas for our country as whole. More women in politics will also reinforce diversity and inclusion in our multicultural society.

Sawo is a women’s organisation based in Sabah that advocates for gender equality and women’s empowerment through supporting women in politics and fighting against gender-based violence. 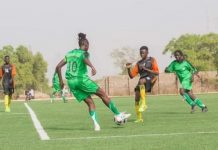