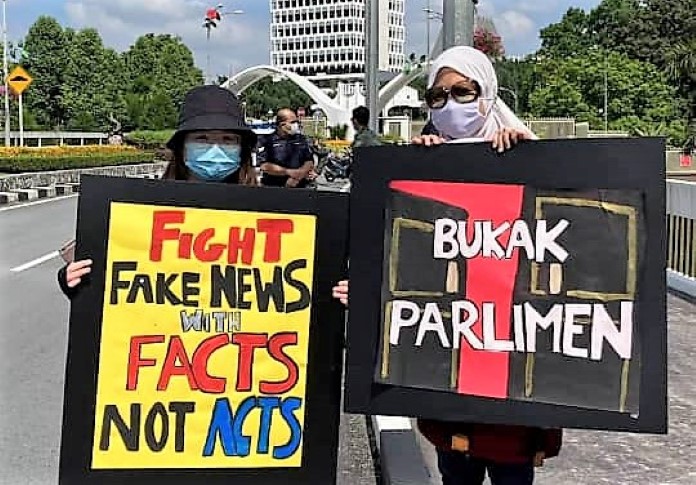 Malaysian authorities should revoke a new “fake news” ordinance that poses a serious threat to freedom of expression and privacy and the right to a fair trial, Human Rights Watch has said.

The Emergency (Essential Powers) (No. 2) Ordinance 2021 was issued on 11 March 2021 under the 12 January proclamation of Emergency and came into effect on 12 March without any public consultation.

The new ordinance makes it a criminal offence to create, publish or disseminate “fake news” relating to Covid-19 or the proclamation of emergency in the country or to fail to take down such material upon the government’s request.

It also requires individuals, corporations and social media platforms to give the police access to traffic data and “computerised data” upon request, permits corporate directors and other executives to be held criminally liable for company actions, and overrides rules of evidence intended to ensure a fair trial.

The ordinance purports to apply to anyone violating its terms anywhere in the world.

“The new ordinance contains much that was wrong with the old law and will stifle much-needed discussion of the pandemic and how it has been handled by the Malaysian government.”

The ordinance imposes sentences of up to three years in prison for the creation, publication, distribution, or dissemination of “fake news” that is “likely to cause fear or alarm to the public”.

“Fake news” is defined as “news, information, data and reports which is or are wholly or partly false relating to Covid-19 or the proclamation of emergency”.

The ordinance fails to establish standards for determining what is false, raising the risk that it could be used to silence criticism or other speech the government does not like. It also allows criminal punishment without requiring that the person or company disseminating the “false” information knew that it is false, thus putting at risk those who share information believing it is true or those who make critical comments based on a misunderstanding or misinformation.

Under the ordinance, individuals, corporations and internet platforms must remove content within 24 hours after a police officer or other authorised official tells them to do so. The ordinance does not specify that a court order is necessary.

Anyone who claims to have been affected by “fake news” can apply to a court, with no notice to those who wrote or posted the material, for an order to remove the content.

Notice of the order can be served electronically, including by sending it to a person’s social media account.

While those affected can appeal the order after complying with it, no appeal is permitted when the order was obtained by the Malaysian government and related to “fake news that is prejudicial or likely to be prejudicial to public order or national security”.

Under international human rights law, governments have an obligation to protect the right to freedom of expression, including the right to seek, receive and impart information of all kinds.

Governments may only impose restrictions on freedom of speech if those restrictions are provided by law and are strictly necessary and proportionate to achieve a legitimate aim, including the protection of national security, public order, public health or morals, or the rights of others.

Any such restrictions must also be written sufficiently clearly that those subject to the law can understand what is prohibited.

The new ordinance falls far short of these standards, Human Rights Watch said. Not only does it fail to require that the “fake news” be material and cause real harm to a legitimate interest, it also does not clearly define the prohibited content.

The resulting lack of clarity will chill discussion of the proclamation of emergency, the Covid-19 pandemic, and the government’s handling of that pandemic, out of fear of prosecution.

In trials under the ordinance, some of the usual restrictions imposed on the admissibility of documents and statements by the accused in Malaysia’s Evidence Act do not apply, raising concerns about due process and the right to a fair trial.

It would thus allow as evidence the use of documents seized without a warrant in circumstances when a warrant would normally be required and statements made under compulsion or other form of threat, creating perverse incentives for Malaysian law enforcement.

The ordinance requires individuals, corporations and social media companies to give police conducting a search access to “computerised data” stored in a computer or otherwise.

While “computerised data” is not defined, the ordinance specifies that access includes “being provided with the necessary password, encryption code, decryption code, software or hardware and any other means required to enable comprehension of computerised data”, making it clear that the requirement applies to content.

The UN special rapporteur on freedom of opinion and expression has stated that court-ordered decryption is only permissible when it results from transparent and publicly accessible laws applied solely on a targeted, case-by-case basis to individuals and subject to judicial warrant and the protection of due process rights of individuals.

Those whose communications are decrypted must be notified at the earliest moment that protection of public safety or national security allows, which is critical for access to redress and remedy where rights have been violated.

The emergency ordinance does not make clear whether a court-authorised warrant is required for such disclosure, nor does it require notifying the person whose communications have been decrypted.

Under the ordinance, a police officer may require internet service providers to preserve and disclose traffic data, defined to include the communication’s “origin, destination, route, time, date, size, duration or type of underlying service”, by providing written notice. Failure to comply is punishable by up to one year in jail.

Access to such data, which may give an insight into an individual’s behaviour, social relationships, private preferences and identity, raises serious privacy concerns and should only be permitted when provided by law, proportionate, and necessary for the protection of a legitimate state interest.

The new ordinance, which places no meaningful limitations on the purposes for which authorities may request such data or how long the authorities may require it to be stored, does not meet this standard and could lead to indiscriminate surveillance, Human Rights Watch said.

“With its ill-defined terms, the ordinance is ripe for abuse. The government should revoke this ill-considered ordinance and counter misinformation about Covid-19 with accurate information, not criminal prosecutions.” – Human Rights Watch