We, the undersigned civil society groups from Sabah, Sarawak and the states of Malaya, welcome the Pakatan Harapan federal government’s proposal to amend Article 2 of the Federal Constitution to restore the rightful status of Sabah and Sarawak as equal partners to the states of Malaya in the Federation of Malaysia.

1. As a bundle affecting some 30 articles and schedules in the Federal Constitution , the 1976 Constitutional Amendment that changed Article 1(2) from its 1965 version

The States of the Federation shall be—

(b) the Borneo States, namely, Sabah and Sarawak.

Most painfully, this amendment with great symbolic significance was consented by the state governments of Sabah and Sarawak, then carried by 130 MPs, including 23 from Sarawak and 10 from Sabah.

2. We fully support the federal government’s intention to restore the 1965 version of Article 1(2), but we suggest for Sabah and Sarawak to be listed separately, as the 11 states of Malaya are collectively equal to Sabah and Sarawak each, and not the two combined as the Borneo states. The new Article 1(2) should therefore read:

The States of the Federation shall be—

2. In the same spirit, we object to categorising the Federal Territory of Labuan, traditionally a part of Sabah until 1984, as part of the States of Malaya for the purpose of constituency delimitation, as per the current version of Article 113(6) which reads:

There shall be separate reviews under Clause (2) for the States of Malaya, Sabah and Federal Territory of Labuan, and Sarawak; and for the purposes of this Part the expression “unit of review” shall mean, for federal constituencies, the area under review and, for State constituencies, the State and the expression “States of Malaya” shall include the Federal Territories of Kuala Lumpur and Putrajaya.

3. We hold that the above two amendments proposed by us are not at all cosmetic but of great symbolic significance in restoring the rightful status of Sabah and Sarawak, eroded by a wide range of constitutional, legal, administrative and fiscal moves including the sinister 1976 Constitutional Amendment which was neither cosmetic at all.

4. As the above two amendments are straightforward, we call upon all parliamentarians and parties, be they from Sabah, Sarawak or the states of Malaya, to enthusiastically and wholeheartedly vote for the two amendments, without resorting to any technicalities to delay any more the restoration of Sabah’s and Sarawak’s rightful status as equal partners to the states of Malaya, as per the spirit and letter of the Malaysia Agreement 1963 (MA63).

5. For more substantive constitutional, legal, administrative and fiscal changes that are needed to fully restore Sabah’s and Sarawak’s rights under MA63, broad-based consultation – involving all stakeholders including the governments and legislative assemblies of Sabah and Sarawak and other states – must be carried out in a well-planned manner, which may take the vehicle of a parliamentary select committee, a royal commission of inquiry or even another inter-governmental committee.

Youth – Is #MasaKita the answer? 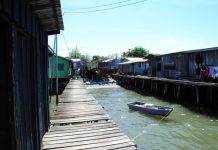 Warisan tripped up by low turnout