The International Steering Committee of the Global Campaign for Ratification of the Migrant Workers is challenging countries to ratify the international migrants’ rights convention to mark the 20th anniversary of its adoption by the United Nations.

Geneva, 12 April 2010 – A global campaign to challenge countries to end abuses and exploitation of migrants by protecting their human rights has been launched to mark the 20th anniversary year of the adoption by the United Nations General Assembly of the International Convention on the Protection of the Rights of All Migrant Workers and Members of Their Families on 18 December 1990.

This campaign calls on governments to act immediately to end the widespread human rights violations suffered daily by migrants around the world, by ratifying this core international human rights instrument.

The United Nations estimates that 214 million people are currently living outside their countries of birth or citizenship. According to the International Labour Organisation (ILO), nearly half this number are economically active as migrant workers. Together with their families, they make up the majority of all international migrants.

Almost all countries are affected by migration, as origin, destination or transit countries, and many are all three. “Although, for many persons, migration is a positive experience, many others migrate under duress and face severe hardships,” underlined Carla Edelenbos of the Office of the High Commissioner for Human Rights (OHCHR) and coordinator of the Global Campaign Steering Committee. “Migrant workers all over the world suffer abuse, discrimination and exploitation by smugglers, recruitment agents and employers. The urgent need to protect migrants from abusive practices underlines the importance of ratification of the Convention.”

Support the struggle to build a Malaysia based on Justice, Freedom, Solidarity:
READ MORE:  What if Malaysia… ratified the UN Refugee Convention?

The Convention sets out legal standards and provides guidance for national laws and policies that recognise the specific vulnerabilities of migrants and promote humane and lawful working and living conditions. Ratification of this core human rights instrument is an important step to end abuse and exploitation of migrants.

To date, the Convention has been ratified by 42 States and signed by another 16 – signature being the preliminary step to ratification.

The Campaign urges all those states that have not yet ratified the Convention to seize the occasion of its 20th anniversary to send a strong message to the international community of their commitment to the protection of the rights of migrants.

“States must face up to their responsibilities and say no to exploitation and discrimination. We hope that on the 20th anniversary of the adoption of the Convention, on 18 December 2010 we will be celebrating a record number of ratifications,” concluded Edelenbos.

The Campaign was launched by the International Steering Committee, a unique network of UN agencies, international organisations and global civil society organizations. 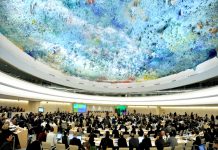