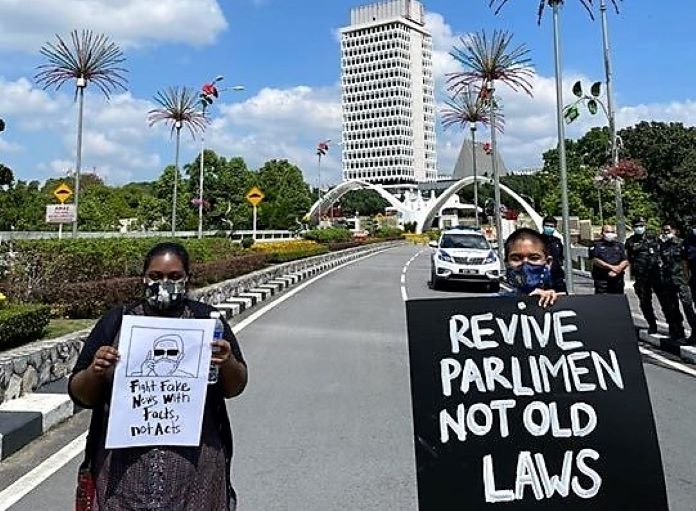 The CSO Platform for Reform (CSO Platform) therefore welcomes Deputy Speaker Azalina Othman Said’s voice of concern, as expressed in her Twitter recently, that the suspension of Parliament has crippled democratic voices.

The exponential rise in the daily Covid cases during the emergency imposed by Prime Minister Muhyiddin Yassin has proven that the Perikatan Nasional has failed to manage the health pandemic.

Of late, we have seen a series of mishaps under Muhyiddin’s incompetent governance: the harassment and arrests of activists, the hitting of the 7,000 daily Covid cases mark, which saw Malaysia taking over India’s statistics; the Prasarana Rapid light rail transit accident and the post-accident press conference handled terribly by Tajuddin Ramli, who joked about the “kissing trains”; and Khairy Jamaluddin’s failure in handling the second round of AstraZeneca vaccination registration, which saw many applicants taking to social media to voice out their frustration and anger.

But most importantly, the government must account for how the National Trust Fund (KWAN) funds are being used, the manner in which tenders were awarded under the special allocation of RM5bn for the national vaccination programme, the distribution of financial aid throughout the period of lockdowns, the implementation of Budget 2021 and as well other economic matters that involve the welfare of the people.

Since the setting up of the CSO Platform in 2018, a coalition of 80 NGOs based in Malaysia, we have been consistently pushing for institutional reforms, including parliamentary reforms, and the closure of the Parliament for so long only defeats any form of checks and balances and the reforms that have started.

The PN government cannot continue to hide behind Covid anymore, or the “darurat” (emergency) to curb the pandemic.

We call upon Muhyiddin to end the emergency and reconvene Parliament so that our democratic voices will continue to be heard. Parlimen, Digital which was held last year, as well as many crucial meetings, have been held online and important decisions were formed and made.

We also urge the other MPs, state legislative assembly members and Deputy Speaker Mohd Rashid Hasnon as well as the Speaker of the Dewan Rakyat, Azhar Azizan Harun, to issue statements and demand that Parliament sessions resume. To ignore the rakyat’s voice is a travesty of democracy and justice.