The Centre for Independent Journalism is shocked and saddened to hear that rioters at a recent incident reportedly targeted a media professional for attack.

According to local media reports, Malay Mail photographer Mohamad Azinuddin Ghazali was set upon by around 15 men while covering an attack on a temple in Subang Jaya. The attackers forced him to erase photographs from his camera, destroyed a memory card, and hit him on the head with a stone.

The attack is aggravated by the apparently premeditated nature of the “riot”, with Home Minister Muhyiddin Yassin claiming at a press conference that the rioters were paid to participate in the attack. According to the home minister, lawyers acting for a developer paid Malay-identifying men to attack the Hindu temple where the attack occurred.

The minister further alleged that those hired were chosen with the apparent intent of sparking a racial incident.

The incident illustrates the importance of ongoing debate, discussion and transparency particularly on sensitive issues such as the proposed demolition of a temple.

To prevent future incidents of this nature and to ensure that such incidents are not able to provoke ongoing racial violence, there needs to be a thorough open investigation and prosecution of all those involved; and open and ongoing discussions on race relations, religious freedom and the meaning of human rights and democracy in Malaysia.

Free, diverse media are vital to ensuring these debates occur peacefully, and in this context we urge the Cabinet to deepen its commitment to media reform, particularly the tabling of a freedom of information bill.

We are heartened by the robust response from ministers and members of Parliament from both sides of the political divide, and look forward to ongoing reform to ensure that such events do not recur.

Sonia Randhawa is director of the Kuala Lumpur-based Centre for Independent Journalism. She issued the statement in response to the attack committed by a group of men against a media photographer who was at the scene of the riot on the night of 26 November 2018, at the Sri Maha Mariamman Devasthanam temple in Subang Jaya. 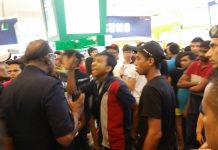 What kind of Malaysia awaits the next generation?

Malaysia will not bow to acts of violence