The Association for Community and Dialogue condemns the actions of some assembly members in Perak who have defected.

Such blatant abuse of the people’s mandate has proven again that electoral representation from political parties does not guarantee the Rakyat’s aspirations. This is why an anti-hopping law has become crucial.

The elite who represent political parties might be there for some personal reasons rather than genuinely believing in their struggle.

It is sad that there are elements in political parties who are willing to trade their personal integrity for personal gain.

At the 2018 general election was held, there were three parties contesting the Buntong state seat in Ipoh: Barisan Nasional, the DAP and the Socialist Party of Malaysia (PSM).

I asked one politician why should the people not support the PSM candidate who was principled and had a long and illustrious record in fighting for the marginalised.

The answer was that principles don’t bring victory.

At that time there was a clamour for change, and it was perceived that it would be better to elect a Pakatan Harapan assembly member who had a better chance to win the election instead of voting for parties that had no chance of winning.

The events of the past few weeks clearly indicate that credibility and principled politicians count.

It is time for Malaysians to assess election candidates based on their credibility and integrity instead of merely supporting a political party.

Politicians should be tested on issues like governance, environmental activism and social justice. This is to avoid electing representatives who lack moral rectitude and understanding of these areas and the respective struggles involved.

READ MORE:  Narratives of PH governance – the Good, the Bad and the Ugly

When it comes to the crunch, a candidate who stands by principles will ensure the government does not collapse, in contrast to a candidate who may have a better chance of winning an election but lacks character.

Let’s choose candidates based on their overall qualities and record. 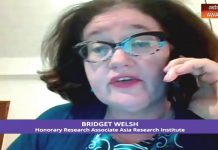 Shameless politicians and religious bigots in our midst