Today’s landmark decision by the Federal Court on Indira Gandhi’s case is a huge victory for all Malaysians, says the Women’s Aid Organisation.

It affirms that both parents have equal right to decide on their child’s religion.

Today’s verdict is testament to the tenacity and courage of Indira Gandhi, S Deepa, Subashini Rajasingam, Shamala Sathiyaseelan, their lawyers, and women’s groups who have fought against unilateral conversion since 2004.

The police must enforce today’s verdict – not just for Indira Gandhi and S Deepa, but for all others in similar situations.

Unilateral conversion is a grave violation of women’s rights and has led to more grievous violations, including child abduction. The police must reunite Indira with her youngest child, Prasana Diksa, whom the ex-husband abducted in 2009 and refused to return, in contempt of court.

No one should ever have to experience the injustice that Indira went through. 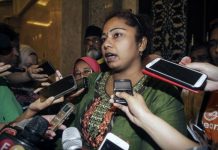