Once these government MPs have fully occupied their positions as heads of these companies, the ‘good old days’ could return to haunt nation, WH Cheng writes.

Recently, Pas secretary-general and Minister in the Prime Minister’s Department in charge of law Takiyuddin Hassan gave his assurance that all Perikatan Nasional MPs who did not join the cabinet would be appointed to lead all the government-linked-companies.

All incumbent heads of government-linked companies and agencies will be terminated as soon as possible to make way for these PN MPs to take over.

Here you go, one after another, chairpersons and heads of government-linked companies who were not all political appointees but from professional backgrounds were sacked or terminated systematically to allow government MPs to assume these positions.

It has been highlighted that the process of terminating these incumbents started as early as the end of March.

Just what exactly does the Pas leader mean by monitoring these government-linked companies’ activities? Will all those MPs, who are mostly without business or professional experience, be able to carry out effective monitoring of these companies? This is doubtful.

The only thing they will do is to attend company meeting, listening to briefings, give a few political statements and sign off documents and expenditure – that’s it. The other thing these MPs will do is that they might bring in all their “contacts” and cronies to take up whatever contracts are available in these government-linked companies. What is to stop these MPs from eventually getting their “reward” in return for giving them those contracts or businesses?

Once these government MPs have fully occupied their positions as heads of government-linked companies, the ‘good old days’ will then return to haunt nation, based on what had happened previously for more than 60 years until 2018.

Corruption, abuse of power, mismanagement, lack of accountability, incompetence and transparency are set to return once the plundering begins.

Prior to making such decisions, we wonder if Prime Minister Muhyiddin Yassin ever pondered over what could happen if he were to give the go-ahead for all his MPs to be appointed as heads of government-linked companies.

Why hasn’t anyone within his inner circle reminded him of the past misdeeds and plundering carried out by those linked to Umno and BN which cost our nation billions of ringgit, almost plunging the nation into bankruptcy?

Or did Muhyiddin simply choose to totally ignore all those concerns just because he wanted to secure the support of the MPs from Umno and Pas to ensure his survival as PM? In other words, does this mean he merely wants to be prime minister until the end of this term, ie he merely wants the title in his profile that he was “a prime minister”?

Yes, he may have reasoned that some Bersatu MPs turned against Pakatan Harapan (PH) two months ago to ensure his party’s survival in the next general election, but whatever he does today does not seem to represent such reasoning.

He appears to have embraced those who once plundered the nation’s coffers in front of his eyes. Will his actions today really ensure the survival of Bersatu in the next general election? These questions will be left unanswered until the end of this term.

Should we press ahead with these questions, he might merely give a lame excuse, ie to protect the equity of the Malays and bumiputeras from falling into the hands of others. Perhaps Pas will also help him to give an answer which is more religiously oriented.

Then whoever questions or tries to scrutinise their actions and decisions may be accused of trying to undermine the position of Malays, bumiputeras and Islam in this nation.

The process of termination of these incumbent government-linked company heads is ongoing, and it will be follow by new appointments in the next few weeks to fill the vacancies. And you will then seeing congratulatory messages to all these new appointees being published by their supporters and cronies. 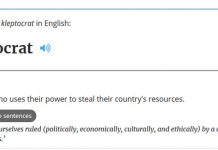 Note to government-linked firms: Fix yourselves before fixing the economy

Unfortunately, Malaysia will always be led by those with their own agendas. Pity that the so-called holy men of PAS are consumed with a lust for power and are full of greed.

These are the very people who will hold Malaysia back. The sad thing is that the ordinary members seem to give their tacit approval by their silence. No outrage, no protest..All seem devoid of moral uprightness

Is this another indication that that those who stand for election may be doing it more for self service to have luxurious lifestyles [for ownself and families] to be enjoyed during the period elected and later via pensions for life to be financed by taxpayers and standing for election does not have any requirements including any expertise or qualifications or age limits and availability of other opportunities for self enrichment to fulfill own greed and PROMISES TO SERVE THE RAKYAT JUST ANOTHER PROMISE TO BE MADE BUT NOT REQUIRED TO BE FULFILLED OR THE OATHS TAKEN WHICH MAY BE JUST A FORMALITY AND SLOGANS?

Also are the elected reps proxies for those who financed their high election costs?
[ANOTHER COMMON WORLDWIDE CULTURE]

It is the UMNO/PAS culture. Take advantage where the money and opportunities can be milked through politics!!