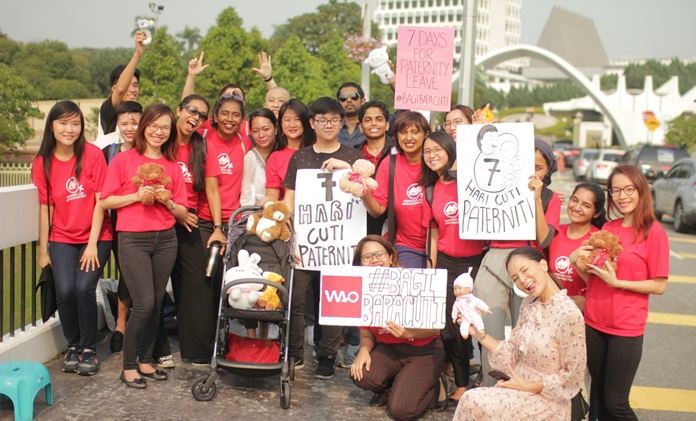 A petition by the Women’s Aid Organisation (WAO) calling for at least seven days’ paternity leave in the private sector has garnered 39,340 signatures.

Television personality and child advocate Daphne Iking, who was present at the petition handover, highlighted the importance of paternity leave in encouraging shared parenting.

“I am fighting for at least seven days of paternity leave to allow more fathers to play an active role during childbirth and to be there with the mother so they both can adjust and share the responsibility of taking care of the newborn.”

“The crucial first week also allows fathers to be more hands-on with housework and take care of the baby and other kids, so mum can get her optimum rest and heal after labour.”

Those who signed the petition also shared the challenges they had faced due to the lack of paternity leave.

“I just became a father recently and without proper paternity leave to care for my new-born baby, it is hard on my wife and me,” explained Jasper Ooi.

“I just gave birth to a premature baby and my husband had only two days of paternity leave. I still need him to check on the baby who is in the neonatal intensive care unit and support me,” said Priyasheni.

Meanwhile, other petitioners emphasised that workplaces must better support parents.

“Seven days of paternity leave should be the absolute minimum. You can’t expect your employee to perform at his best when you’re forcing him to choose between work and family,” said Abol Hanif Abol Munafi.

Paternity leave is common in many countries. Singapore has two weeks of paid paternity leave; Myanmar, 15 days and the Philippines, between seven to 14 days.

It may be appropriate to ascertain how many husbands used their three days paternity leave to be with their wives and new born babies. If majority did not use for the purpose then there is no reason to increase the period to seven days. Also how many ever used their eligible leave for being with their wives and new babies and if the numbers are negligible then it may deduced that paternity leave period may have been used by the husbands for other purposes including holidays or being with their other wives [if polygamous] …
IN THE MEANTIME THE NEW MOTHERS MAY BE LOOKED AFTER BY HER PARENT
The same may apply to the public sector.