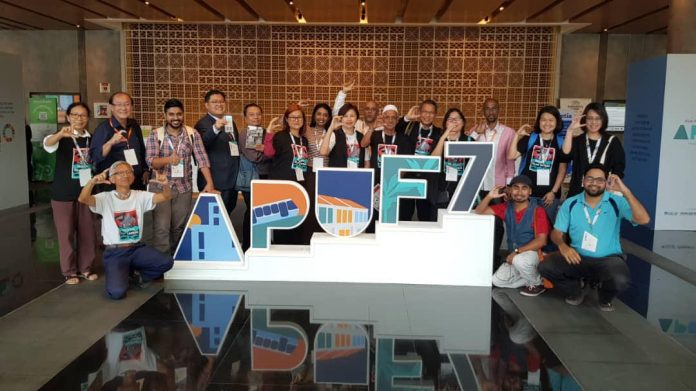 As the Penang state government hosted the seventh Asia Pacific Urban Forum (APUF) at Spice, concerned citizens of Penang Island highlighted the destruction that would be wrought by the proposed “Penang Southern Reclamation” project, also called “Penang South Islands”, less than 10km away.

The push by Zuraida Kamaruddin, the Malaysian Minister of Housing and Local Government, for more stakeholder engagement is to be lauded.

However, the Persatuan Nelayan Pulau Pinang (Penang Fishermen’s Association) expresses its regret that the report on the social impact assessment of the reclamation, required under the Town and Country Planning Act, was approved on 17 May 2019 – even though most fishermen in the impacted area were never informed or consulted about the assessment.

Lack of transparency has been a defining feature of the massive reclamation project, which will create three artificial islands spanning 4,500 acres (larger than Forest City). The agriculture and agro-based industry ministry has acknowledged that the project will affect the lives of 5,000 Penang fishermen and 2,300 Perak fishermen, though other sources have put the latter figure as high as 6,000.

Support the struggle to build a Malaysia based on Justice, Freedom, Solidarity:
READ MORE:  Penang's mega-reclamation project: Fishermen speak out

Affected communities and civil society advocates have pointed out how members of the Penang state government, especially the executive council member for agriculture, often look condescendingly upon on fishermen and do not protect their rights. They urge the country’s leaders to embrace a vision of a sustainable and inclusive city that is supported by the New Urban Agenda.

The UN-Habitat’s New Urban Agenda and the UN’s sustainable development goals must not be mere tokenisms uttered at international conferences but must require UN agencies and state parties to commit to actual engagement with stakeholders.

The Penang southern reclamation project goes against the principles of socioeconomic inclusivity:

The Penang Fishermen’s Association has repeatedly voiced their objections since 2015, with a demonstration by 1,500 fishermen, and a protest at sea in 2017 with 450 fishing boats. However, the Penang government continues to deny the fishermen’s rights to livelihood in favour of this project.

Two petitions related to this protest have been signed by 240,000 supporters. The number clearly demonstrates the groundswell of support for these fishermen and the concern that the project will likely result in a total destruction of the coastal and marine ecosystem (SDG14), including the richest fisheries in the waters of Penang and northern Perak waters, natural beaches with endangered turtle landing sites, marine mammals, coral reefs, mudflats and mangroves.

The importance of small-scale fisheries sector has been recognised by the UN Food Administration Organization. Small-scale fisheries should be maintained due to their sustainable practices and their efficient delivery of protein and nutrients to the bottom 40% of households through close ties with these communities. In times of global warming and declining global fisheries resources, these coastal fishermen contribute significantly to food security strategies for the future.

Furthermore, it should be pointed out that the reclamation poses a threat to the billion-ringgit marine aquaculture industry in Penang and northern Perak – which accounts for half or more than half the tonnage and wholesale value within peninsular Malaysia. The aquaculture centres in this area are also the main suppliers of fresh fish to Singapore and live garoupa to Hong Kong.

The Penang Fishermen’s Association has presented a memorandum to a representative of UN-Habitat on behalf of the affected coastal fishing communities. Also present at the Asia-Pacific Urban Forum were members of Penang Forum and other concerned NGOs who are a part of the Penang Tolak Tambak (Penang Rejects Reclamation) coalition as well as representatives of the Jakarta Tolak Reklamasi (Jakarta Rejects Reclamation) coalition.

Participants from all around the world who are concerned with sustainability, inclusivity and climate change congregating at the seventh Asia Pacific Urban Forum are asked to support the call by Penang Tolak Tambak to cancel the Penang reclamation project. The Penang state government is in a special position to remedy this major environmental transgression by cancelling the project now.