C4 Center is disturbed by Bersatu vice president Abdul Rashid Abdul Rahman’s calls for government resources to be given to party members in a bid to retain power.

It is now absolutely necessary for Bersatu to reprimand Rashid for making such proposals, which would only bring Malaysia back to how it was under Umno. Action against Rashid would also indicate the party’s credibility in handling such issues. Pakatan Harapan component parties cannot succumb to Umno-style politics.

In his speech made during Bersatu’s second annual general meeting, Rashid is reported to have said that it is “stupid” not to give government projects to party members. He also pointed out that the projects given to his party’s division leaders would be vital in ensuring the party’s victory in the coming general elections “by hook or by crook”.

Rashid should consider himself lucky for chairing the election reforms committee for which he receives a fat salary, even though he had in the past, admitted to ensuring Umno’s victory in general elections.

Bersatu chairman Dr Mahathir Mohamad’s response to this issue is merely a move to downplay the issue by blaming the previous government for sidelining some who are qualified to obtain the contracts.

The move by party youth chief Syed Saddiq Syed Abdul Rahman, who criticised calls from delegates for contracts, and the youth wing, Armada, which stood firm against this practice, indicates that the party’s wing is ready to lead in the right way.

While delivering the 11th Malaysia Plan mid-term report, Mahathir stated that the strategies include improving procurement management and strengthening the performance management framework, monitoring and evaluating.

He also spoke of enforcing the open tender system with a more relevant, comprehensive and effective legal framework. During last year’s budget, Finance Minister Lim Guan Eng said a public procurement law would be tabled at the sitting of the next session of Parliament in April.

The prime minister and his cabinet must show resolve to push through a comprehensive and transparent procurement system and not succumb to pressure from the party grassroots and look for short cuts in political financing.

It is also absolutely vital that this government punishes those who abuse their political position to obtain government contracts as Pakatan Harapan gained power on the basis that the former Barisan Nasional government, under the leadership of Najib Razak, was filled with corruption.

C4 Center’s stand is that more Malay contractors can be helped through the open tender system as the system would ensure that the best Malay contractors would be elected to the job. This method would eliminate the need for political affiliation towards Bersatu and bring about real support for the party instead of the patronage-based support that was practised by Umno.

How can the Malays be assisted economically by Bersatu when contracts that were given out based on patronage politics only succeeded in aiding Umno-linked individuals?

We are willing to assist the government to bring about positive changes, but nothing will change if there is no political will on the part of Pakatan Harapan.

C4 Center would like to demand that the government: 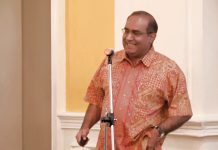 Imagine ending up with UMNO’s main handmaiden in manipulating the electoral system as the chairman of the Election Reforms Committee. Totally unrepentant too and still firmly believes in winning elections by hook or by crook. To the other members of the Election Reform Committee: I am putting all my hopes on you folks to push hard for meaningful electoral reform.

Lets see what PM does- its his party , right?

Any center Center fir center for all races contractors..?

I would say he should be investigated and tried in court.