Patriot appeals to all members of Parliament on both sides of the divide and in both East and West Malaysia to exercise a conscionable resolve to help end the current political crisis.

The call for Prime Minister Mahiaddin Yasin and his cabinet to resign has spread all over the country, reflecting the trust deficit that has hit a critical low following the Perikatan Nasional government’s performance over the last 17 months.

Patriot postulates we can only successfully battle the worsening state of the health pandemic and the symbiotically connected economic and social challenges and fallout if our country’s leadership issue is resolved.

The prime minister’s declaration that Parliament will only convene in September has aggrieved matters further. Opposition MPs are demanding a special Parliament sitting to be held immediately to decide on a motion of confidence against the prime minister.

Patriot’s concern, which resonates with the people’s, is the ensuing moves to solicit support with enticements in a protracted period of weeks from now.

As pointed out by former Attorney General Tommy Thomas, “The prime minister has no other option. He cannot stubbornly cling to the office.”

Patriot concurs with Tommy Thomas that the Dewan Rakyat should sit urgently to deliberate on motions of no confidence or confidence, as the case may be.

We appeal to all MP on both sides of the divide, and in both West and East Malaysia to act conscionably. They must recognise the commonly and widely shared perception among citizens and act to meet those by their very oath of office.

Patriot will condemn any moves by any MP who takes a particular side driven by deceit or solely for self-gain. Likewise, we vociferously condemn any form of coercion used to compel MPs in supporting any one side.

Every MP has a categorical duty to King and country and they must act in the best interest of the nation, consistent with the aspirations of the rakyat and not out of a convenience culture. 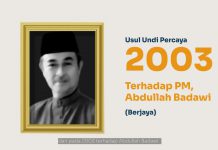