Pakatan Harapan (PH) promised Malaysians it would increase the number of women in policy-making positions if Malaysians voted them into power.

This election promise was made on p181 of its Buku Harapan: “Memastikan sekurang-kurangnya 30 peratus daripada pembuat dasar di setiap peringkat adalah wanita.” At minimum, they pledged that women would make up 30% of policy makers appointed by the new government.

PH has been voted into power. However, the evidence thus far shows that PH is not fulfilling this minimum promise it made to voters.

In the following PH-led states, this is the composition of women in the entire state exco, including the chief minister or menteri besar:

This is an indictment that PH does not seem to have the political will to make good on its promises when it comes to women. This is particularly clear in the states of Penang, Selangor and Johor where PH could have certainly appointed more women into the exco, and yet it didn’t.

In the other states of Kedah, Malacca, Negeri Sembilan and Sabah, the question that needs to be asked is, how many women candidates did PH field in those states? If PH was serious about ensuring a minimum of 30% women in policy-making positions, did the coalition ensure that a sizeable number of women were fielded, so as to increase the chances of women being voted in and hence being appointed to the state exco?

READ MORE:  When a new cabinet looks worn out

Women make up about 50% of the Malaysian population. Politics isn’t just about popularity or length of service and position in the party. It is also about representation. And it certainly is about political parties keeping their promise to voters.

We expect PH to fulfil all its election promises whether it is about investigating 1MDB, carrying out institutional reforms or ensuring that women are better represented in this country. We deserve a government that keeps all its promises – not one that treats its promise of ensuring women’s equal right to representation as unimportant.

If PH is unable to fulfil its promise in the states listed above, we expect them to explain to voters why they have not fulfilled their promise. As voters, we also expect PH to let us know what its timeline is for realising its promise of a minimum 30% and what concrete steps it will be taking to rectify its current inability or lack of political will to do so.

Keep your promise for cabinet

Under the Barisan Nasional government, Malaysian women representation was among the lowest in the world, according to the Inter-Parliamentary Union. PH promised it would ensure that Malaysia did much better by starting with a minimum of 30%.

In the PH-led cabinet so far, there are only three out of 14 ministers, which makes the composition of women in this partially formed cabinet only 21%.

The cabinet is the highest policy-making body in Malaysia.

The federal PH government has one last chance to prove that it will keep its election pledge to voters at least in cabinet (given that the promise of a minimum of 30% women in PH-ruled state governments has not been fulfilled).

READ MORE:  Consent has clear boundaries that everyone must learn

More women ministers need to be appointed to cabinet when the full cabinet is finally announced. If the cabinet has 25 ministries, then a minimum of eight ministers should be women.

In this year’s general election 21 women MPs from PH were voted in (PKR 11, DAP 8, PPBM 1 and Warisan 1*). Three have already been appointed into cabinet. That leaves PH with a choice of 18 other women MPs for only five positions in the cabinet. PH would have to appoint another five women to the fully-formed cabinet if the promise of 30% is to be fulfilled. Indeed, there are more than enough women MPs from PH for this to happen.
As there are enough qualified women MPs to choose from, PH must keep its promise of a minimum 30% women’s representation in cabinet. It must prove that it treats its promises about women’s right to be represented as equally important as its other electoral promises.

Failure to do so would imply that PH treats as secondary and dispensable the promises it makes about women’s rights and representation in this country.

We welcome more endorsements from other groups and individuals. We will update this page over the next few days. 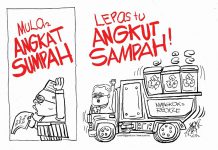 Give women equal rights to confer nationality on their children

Feminism is cancer…. chose because of qualify….

Ada 5 tahun why the rush

PH was born on 10th May. It has broke the record by appointing a women as DPM. Give it time to first safe the country.

No good trying to stage manage it. Has to happen naturally.

Whether female, male, Malay, Chinese, Indian or others, most important is capable individuals.

Please able female only. Right person for the right job. Filling post because of female is unwise. Stop it

One step at a time. Slow and steady.

Ya loh, end of the world is not coming. Why the rush?