Tan Seng Hai reports on a forum in Penang organised by residents groups who are concerned that over-development will turn Tanjung Bunga into a concrete jungle.

Forum Report: Overdevelopment along the north coast of Penang.

It was full house in the meeting room of the Paradise Sandy Beach Hotel on a Saturday night (despite a thunderstorm and bad traffic) when close to 150 people attended this public forum organised by the TBRA and the BFRA. About 40 of the attendees were MM2H residents.

The forum was opened by Dr Y K Leong, a TBRA member, giving an overview of the Penang north coast district. This narrow strip of land consists of four small townships: Tanjung Tokong, Tanjung Bunga, Batu Ferringhi and Teluk Bahang. There is relatively little flat land and only one access road from Tg Bunga to Teluk Bahang.

· Do you know that Tanjung Bunga has disappeared from the Penang Structure Plan Map and that Tanjung Tokong’s boundary has been extended up to Mar Vista?

The TBRA has made several attempts with the present state government to reclassify Tg Bunga back to a Secondary Development Corridor. It has met with silence and limited response.

·Do you know that a private developer has proposed a marina and a 41-storey condo to be build on Plot B?

The TBRA has urged the state to preserve Plot B for public use and to make it into a coastal park but there is no commitment from the state.

Low Swee Heong, a member of the Penang Traffic Council, said JPJ data showed that there are more vehicles than people in Penang (1.75mil vehicles for a 1.58 mil population) in 2009. The average vehicle registration growth for Penang is 9.5 per cent per year making it the highest in the country. Swee Heong presented concerns of traffic congestion and pollution with the over-development of the north coast district. There are grave concerns on emergency response services as the only accessible road to Batu Ferringhi is badly congested and jammed during holidays and weekends.

Phil Langham from BFRA presented pictures and an overview of new developments in Batu Ferringhi. This area is zoned as a Secondary Corridor, where the limit is only 15 units per acre; yet some projects have been approved beyond this density limit. There are currently six ongoing and approved projects with a total in excess of 1,000 housing units. Phil showed some very disturbing pictures of hill cutting and slope/cliff piling taken at some of the project sites. This hill degradation could not be seen from the road.

Annelies Allain, a MM2H resident here for more than 20 years, shared her thoughts about living in Malaysia. She said that there are currently 14,895 MM2H residents in Malaysia. This is a small number compared to Singapore which has 130,000. Government figures showed that out of the 15,000 MM2H residents, Chinese make up the most in numbers (about 30 per cent), followed by Bangladeshis and people from UK. She said that there seems to be a big push by the government and developers to build for the “wealthy” foreigners. Brochures tend to oversell with beautiful images of the sun, beaches, hills, nature and tranquillity of the island whereas in fact many foreigners are disappointed when they come over. The government and developers overestimate the number of MM2H residents coming and this caused an oversupply and inflation in the price of properties. This gave developers an excuse to overbuild in Batu Ferringhi.

Lim Kah Cheng, an MPPP councillor representing NGOs, explained the workings of the MPPP. She advised the audience to go to the right department and the right councillor in charge to put forward their grievances. The One-Stop-Centre (OSC) has authority of planning approvals for development. Details of councillors and officers in charge of various departments can be obtained from the MPPP website. She then explained the importance of the Penang Structure Plan (2005-2010) and the Local Plan. The Structure Plan is a very broad-based vision of the state’s policies in housing and public amenities, infrastructure, utilities, environment and others. The Local Plan, however, outlines the land use and density for every single plot of land on the island. Hence, it will determine the kind of development in your neighbourhood. The Local Plan is currently in the final stages of drafting and will be out for public review and feedback soon. Kah Cheng urged the public and residents’ associations to actively participate in the Local Plan review when it is open for public feedback.

The forum ended with all the participants adopting a declaration expressing concern over excessive development in the north coast of Penang Island.

Tan Seng Hai is a concerned resident of Penang 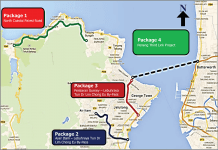