Outsourcing jobs and services, not only in the banking and financial sectors but elsewhere, is antecedent to the basic principles of security of employment – the outrage by the National Union Of Bank Employees over the outsourcing exercise by a certain bank being a case for concern.

When a worker enters into an employment contract with an employer, it is, explicitly, done so on the basis that both parties agree to the terms of the contract. That contract cannot be unilaterally varied or breached by either party.

A contract of employment is premised upon the employer’s obligation to guarantee security of tenure unless and until there occurs a breach of the essential terms of the contract by the worker. In such instances, the employer can institute an appropriate course of action, subject always to the principles of equity, good conscience and the substantial merits of the case.

In a reverse situation where an employer breaches the contract, a worker has an option to seek redress for the breach, though existing labour legislations do not provide adequate support in the matter. In a worst-case scenario, where an employer’s actions destroy the root of the contract, an aggrieved employee has the choice of putting the employer on notice of a plea of “constructive dismissal”. It, however, has to be emphasised that such a plea is not an easy passage, for it places the burden of proof on the worker and is fraught with many a legal challenge.

Though that be the case, unscrupulous employers have, under the cloud of their so-called prerogative to reorganise their operations, devised schemes to deprive workers of their constitutional right to employment. To absolve themselves from the basic tenants of the employment contract entered between them and the worker, they seek refuge under the guise of voluntary or mutual separation offers to entice workers to leave on their on accord and, in the process claim impunity from a challenge to a claim of unfair dismissal pursuant, to Section 20(1) of the Industrial Relations Act, 1967.

READ MORE:  Open letter to chairpersons and CEOs of CIMB, Maybank and RHB

And the prevalence, of such a situation, is being played out where employers outsource the requirements of the job or services which, in our view, is tantamount to a breach of the essential terms of the contract of employment entered into between the worker and his or her employer.

If an employer, contrary to enticing workers to accept a voluntary or mutual separation scheme, has the gall to retrench workers on account of an outsourcing exercise, they should be prepared to have their actions tested before the Industrial Court.

Regardless of a judicial pronouncement in the matter, we are of the view that it is immoral for employers to deprive workers of their constitutional and contractual right to tenure of employment, more so when the requirements of such jobs or services are not redundant but are farmed out.

Open letter to chairpersons and CEOs of CIMB, Maybank and RHB 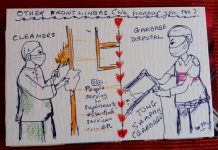