The Centre for Human Rights and Democratic Studies (CEHURDES), a Kathmandu-based freedom of expression monitoring group, has condemned the burning of copies of two leading dailies and the disruption in their distribution in different parts of the country.

On 28 May 2010, pro-Maoist cadres burnt copies of the Nagarik and Republica dailies in the capital, Kathmandu, and other places, for publishing a news report alleging Maoist involvement in the abduction of a medical doctor.

The executive director of B P Memorial Cancer Hospital, Dr Bhakta Man Shrestha, has been missing since 18 May. Citing highly respected sources, Nagarik and Republica reported that Dr Shrestha was close to the Maoists but was abducted by Maoists themselves under orders from a senior Maoist leader.

The Unified Communist Party of Nepal (UCPN, Maoist) and the General Secretary of the UCPN (Maoist), Ram Bahadur Thapa, issued separate statements on 28 May refuting the news reports.

Maoist cadres also disrupted the distribution of newspapers in Palpa and Syangja districts, according to nagariknews.com.

CEHURDES condemns the attack on Nagarik and Republica by UCPN (Maoist) cadres. It is deplorable that cadres of the single largest party in the Constituent Assembly are openly attacking independent media reportedly under the guidance of their senior leaders.

CEHURDES also calls upon the government of Nepal to provide adequate security to media publications and ensure that newspapers are allowed to be circulated across the country without any disruption. 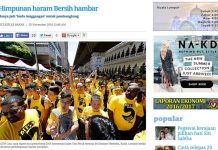 How to diminish Bersih