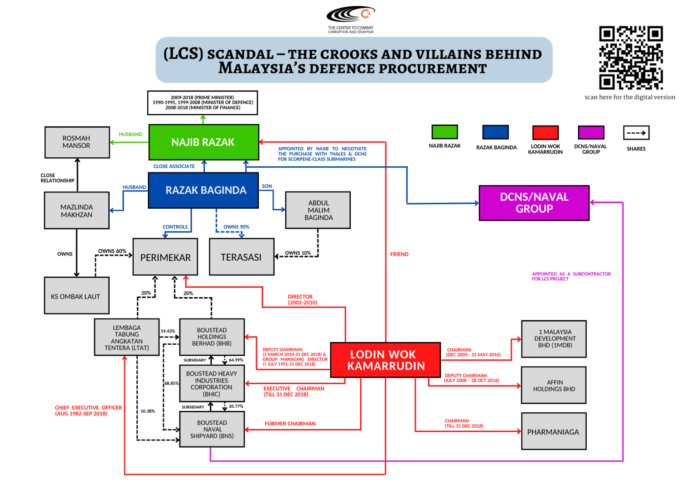 The littoral combat ships scandal that has plagued headlines for weeks now is rapidly revealing itself to be another iteration of the Scorpene submarine scandal that further sullied the already tarnished reputation of former Defence Minister and Prime Minister and current convict Najib Razak – all with similar players and modus operandi.

As the audit report by the special committee on governance investigation, government procurement and finances (JKSTUPKK), following Boustead Holdings internal audit report, was declassified after public pressure, C4 Center is shocked to learn of not just the degree of irregularities involved, but the shocking finds on key figures implicated in the Scorpene scandal also being linked to the littoral combat ships procurement and who have had a strong hand in orchestrating the procurement and all its scandalous dealings.

Investigations have shown that several highly placed individuals were involved in decision-making across both of these scandals, once again revealing the ugly truth that our defence procurement system is corrupt and has allowed large-scale plundering in the name of national security.

Najib is currently serving a 12-year prison sentence for his corruption charges in the SRC International case as well as facing charges for his role in the 1MDB scandal. But it bears reminding that he held the office of defence minister when the agreement to procure the Scorpene submarines was signed, and held the concurrent role of both prime minister and finance minister when it came to signing the agreement to procure the littoral combat ships.

It has further been suggested that ‘hidden hands’ were at play at the earlier stages of the procurement, where politics had further muzzled the process and compromised our national security for personal gain.

Linking the two scandals together is the involvement of the Armed Forces Pension Fund (LTAT), a statutory body managed by the Ministry of Defence.

French court proceedings revealed that illegal commissions and kickbacks associated with the Scorpene scandal were channelled through LTAT. These funds were channelled to Perimekar, a shell company, or what the French described as a “taxi company” controlled by Najib Razak’s associate, Razak Baginda.

LTAT and Boustead Holdings Berhad owned 40% of the shares in Perimekar (20% each).

In the littoral combat ships scandal, LTAT’s presence is less direct but significant – LTAT is the majority shareholder of Boustead Holdings Berhad and has shares in its subsidiary, Boustead Heavy Industries Corporation Berhad (BHIC), and thus retained some control over these companies’ operations.

Both these companies are major shareholders in Boustead Naval Shipyard, the main contractor in the littoral combat ships project.

The above point leads us into a critical discussion regarding a key figure that has largely been absent from scrutiny:

Lodin Wok Kamaruddin is a close personal friend of Najib Razak and former chairman of the 1MDB board of directors.

His involvement in the Scorpene scandal has been well documented.

As the chief executive of LTAT and a director of Perimekar at the time, he oversaw the transfer of illegal funds into Perimekar’s account. 20% of Perimekar’s shares at that time were owned by Boustead Holdings Berhad, of which Lodin was group managing director since 1991.

Lodin Wok has now made a reappearance with strong links to the current littoral combat ships scandal. Aside from occupying the role of group managing director, he was also a former deputy chairman of Boustead Holdings Berhad and executive chairman of BHIC until he relinquished all the stated positions in 2018. His period of tenure would have likely seen him overseeing the initial contracting stages and a substantial portion of the project’s execution.

Besides his stint in the Boustead companies, Lodin also formerly occupied the board of directors and the chairman role of Affin Bank – the same bank used by Perimekar.

More importantly, Boustead Naval Shipyard had promised all of its rights and future income to Affin Bank as collateral for obtaining a huge loan, with the properties affected valued at almost RM6bn. Affin Bank itself is part of the same group as many of the abovementioned companies; LTAT owns 33.1% of Affin’s shares, while Boustead Holdings owns 20.8% of them.

There is demonstrably a circular flow of funds as the companies involved in these projects simply transfer money back and forth from each other, with the facts indicating that Lodin Wok and his associated cronies may likely be the beneficiaries of these operations no matter which way the money goes.

How did the controversial French DCNS re-enter the defence procurement scene right after its notorious role in the Scorpene scandal?

The Malaysian government had directly dealt with DCNS to deliver two Scorpene submarines in 2002, and were later also sub-contracted by Boustead Naval Shipyard, the main contractor of the littoral combat ships project.

French investigations and judicial documents revealed that while acting as Defence Minister, Najib himself had requested $1bnfrom DCNS to be paid to Perimekar, the company controlled by Razak Baginda, who was handpicked by Najib himself to negotiate the procurement agreement.

The former CEO, chairman, and president of DCNS were subsequently indicted by the French court for offences related to foreign bribery, corruption and misappropriation of assets. Thales Group, one of the main shareholders of DCNS, was also charged by the French courts with complicity in bribery over this same scandal earlier this year on 26 April.

The roles of the defence minister must be highlighted with regard to the opaque processes in defence procurement.

Zahid Hamidi, who himself was the Defence Minister during the initial stages of the littoral combat ships project, was revealed to have signed off on a letter by Boustead Naval Shipyard asking him for a letter of intent for the project, despite his previous denial of involvement.

Zahid had also gone against the Navy’s wishes regarding the design of the littoral combat ships, changing it from the Dutch’s Sigma to the French’s Gowind as per recommendations by Boustead Naval Shipyard.

READ MORE:  End of the line for Najib

Boustead Naval Shipyard had adamantly decided on the Gowind design after their own discussions with DCNS. Why the change – were there more bribes involved?

Has MACC investigated this?

A recent audit of the littoral combat ships had dropped a bombshell that there may have been a deal between Boustead Naval Shipyard, the main contractor of the project, and DCNS before the government even issued the initial contract.

The subcontractors for the implementation of the ships’ combat management system, Contraves Advanced Devices Sdn Bhd (CAD) – a former subsidiary of the German company Rheinmetall AG – and Contraves Electrodynamics Sdn Bhd (CED), were revealed to have been issued letters of award based on a quotation that was issued by DCNS before the letter of authorisation had even been signed with the government.

Further parallels can be found between the formation of the companies Perimekar, Terasasi and CED in the context of their respective scandals.

Perimekar was established merely months before the agreement to procure the Scorpene submarines was signed, and therefore had no history nor demonstrable expertise in submarine maintenance or even the financial means to perform the agreement.

Perimekar was a shell company under the ownership and control of KS Ombak Laut, a company owned by Razak’s wife Mazlinda Makhzan, who used her position as a primary shareholder in Perimekar to receive 114m euros in bribes. Another company under the control of Razak Baginda, Hong Kong-based Terasasi Ltd, had also allegedly received 36m euros in kickbacks.

In the littoral combat ships procurement, CED was established to act as a ‘middleman’ to purchase equipment from DCNS. Auditors pointed out that this was a completely unnecessary practice and had caused purchasing prices to bloat substantially. Perimekar was proven to be a shell company formed simply for the purposes of channelling funds and facilitating corruption; it is highly likely that CED served the same purpose.

Prior to the CED’s establishment, CAD had emerged as a joint venture between BHIC and the German Rheinmetall. Even though BHIC owned 51% of CAD’s shares, it had ceded operational control of the company to Rheinmetall, a decision agreed upon by Lodin Wok and the rest of the BHIC board members.

As a result, the BHIC management and auditor had no access to the documents of CAD and CED, and the banking mandate approved by CAD’s board was drafted in a way that signatories representing Rheinmetall would have had full authority to transact any business without involvement of BHIC representatives on the CAD board.

Forensic auditor Prabhat Kumar had told the Public Accounts Committee that CAD was possibly used as a vehicle to minimise transparency and to avoid the scrutiny and detection by the procurement team, the steering committee and the internal audit of BHIC.

Bringing the corrupt to justice

The Public Accounts Committee report investigating the littoral combat ships scandal had already shown us that overruns of RM1bn have already been lost. However, the evidence before us is more than enough to indicate that the losses are not a product of inefficiency or incompetence, as we were led to believe.

READ MORE:  Declassification of the forensic audit report on the navy ships purchase

Instead, it is a complex network spun from the start to enrich the cabal of cronies who maintain control of the companies involved and ultimately benefit from weaknesses in the procurement system. Defence procurement as its own area of focus must be addressed as well, as it has long benefited from the veil of ‘national security’ used to obscure scrutiny and inquiry into it.


Malaysia, France and Germany are all signatories of the UN’s Convention Against Corruption and thus must adhere to the framework of mutual legal assistance in the course of investigations as per Article 46 of the convention