Mindef must state clearly if the 16 land swap cases were conducted through a privatised company as alleged previously and if cronies were acting as middleman, says Mohamed Arshad Raji.

Over the last two days, what was uncovered and reported by the Ministry of Defence (Mindef) was about the impropriety in 16 Mindef land swap cases and the case of four military camps that were used to secure votes for BN politicians. More remains to be uncovered.

Patriot had previously raised the question of the illegality of transferring voters to uncompleted military camps, such as those in Hutan Melintang, Segamat, Paloh and Bera. These camps were constructed not based on need but to help secure votes for BN politicians.

It is a pity that top brass of the military then did not have the gumption to put their feet down against their political masters. It is a sad reflection of the overall decadence and politics of patronage that has engulfed our nation for decades. It is also a reflection of the declining military leadership values that Patriot often mentions.

Patriot believes the 16 land swap cases just revealed are only the tip of the iceberg. As mentioned previously, more than 40,000 hectares of military land was involved. Mindef must make a definite statement whether all the land has been privatised as alleged.

The 16 land swap cases just revealed involved lopsided contracts or contracts implemented without proper due diligence. These are not included in the 350 cases mentioned by Attorney General Tommy Thomas on 20 September 2018 concerning lopsided contracts favouring counterparties drawn by the previous BN government. According to the attorney general, those 350 cases involved highways, services, privately financed build-lease-maintain-transfer projects, ports, and procurement.

Mindef must also state clearly if the 16 land swap cases were conducted through a privatised company as alleged previously and if cronies were acting as middleman.

The suspected modus operandi in the land swap would be for the crony company acting as middleman to carry out a revaluation of the prime military land. The difference in the high-value military land and the new low-value acquired land in the remote areas in the land swap deals would ensure huge profits for the cronies. Part of the profits may have ended up with 1MDB. Incidentally in early 2018 the then CEO of 1MDB was bragging about debt rationalisation. The military land swap deals could have been part of the debt rationalisation programme.

Patriots are members who have served the king and country with honour and pride. It pains us to see the military institution put into a situation of shameful disrepute. For those responsible, heads must roll. 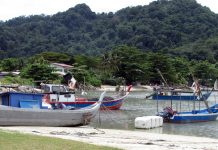