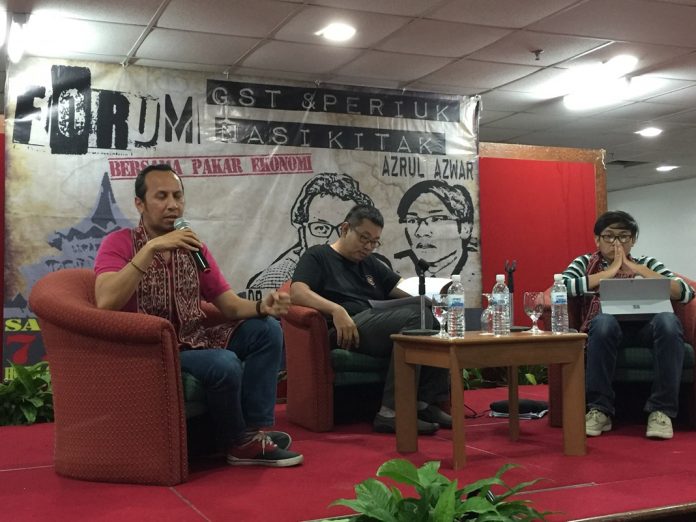 Our recent public forum organised by Rise of Sarawak Efforts (Rose) on the topic ‘GST and Periuk Nasi Kitak’ (GST and Your Rice Bowl) in Kuching received an encouraging response from the student community, members of the public and friends from NGO circles.

About 80 people turned up on Saturday night, 3 March 2018, at a local hotel to listen to the two invited panelists, Dr Muhammed Abdul Khalid and Azrul Azwar Ahmad Tajuddin, who are both economists by training.

The forum was organised by Rose in partnership with another NGO known as Lawyer Kamek For Change and had the support of other local NGOs. Its aim was to raise awareness of the subject of GST, the rising costs of living and other issues affecting young people.

The audience listened attentively to the members of the panel as they answered and discussed a series of questions put to them by the moderator of the forum, Geoffrey Tang, a Rose member.

On the question of GST and whether Malaysia was prepared for the implementation of this consumption tax and whether GST is the cause of the increase in prices of goods and services, both panelists agreed that it was indeed a major contributor to rising prices.

The fall in the value of the ringgit and the withdrawal of government subsidies, which happened at around the same time, further contributed to the burden of rising prices. There was no chance for the people to make adjustments for this.

Muhammed also took the audience through the history of the GST before its implementation and felt that the GST contributes to the regressive tax system in Malaysia. It is the poor who felt the tax burden the most, not the rich. This was because the poor spend a much greater percentage of their pay or income on goods and services than the rich. Both panelists surmised that Malaysia needs a more progressive tax system.

Support the struggle to build a Malaysia based on Justice, Freedom, Solidarity:
READ MORE:  Sabah and Sarawak were promised religious freedom

On the disconnect between what the people experience on the ground ie the rising prices of food, housing and transport and the government’s proclamation that our country’s GDP and economy is doing very well (5.9% in the fourth quarter of 2017), the panelists unpacked this by delving into what GDP means.

GDP is not reflective of the wealth and quality of life/quality of jobs that the people have nor the sustainability of the economy. Some simple proof: even though the GDP of Sarawak is the same as that of Selangor’s, the average household income of Sarawakians is half that of Selangorians.

“Don’t be obsessed with GDP figures,” advised Muhammed. “Instead we should ask these questions and find solutions to them: Why is one in four of Sarawakian children stunted? Why are many of our youths and young graduates unemployed with unemployment rates as high as 10.5%? Half of our graduates earn less than RM2,000 per month and this has been so for the last 10 years”.

“Of what use is high GDP or a booming economy if it does not benefit the rakyat?” asked Azrul Azwar. Currently, we are experiencing stagnant wages; the increase in wages cannot catch up with the rising cost of living and inflation.
Not enough high-income jobs are being created for our graduates, and there is even a drop in the number of available jobs. Annually, 60,000-80,000 new graduates cannot get jobs.

“To solve any problem we first need to acknowledge the problem. And if those in charge or policy-makers refuse to do so you have a problem,” referring to the words of a minister who said that those graduates who had to sell nasi lemak or become Grab or Uber drivers to earn a living were noble.

“The rakyat need to demand that our leaders are people who have the expertise and who have good values and attitudes and who care.”

Azwar urged the audience especially the young to :

As for what the government should do, Azrul recommended public ownership of selected sectors such as the provision of social services like healthcare, education and public transport.

The audience participated in a question-and-answer session and many good questions were put to the panel to answer.

We hope that the forum has succeeded in showing that issues affecting our everyday lives are very much connected with the policies put forth by the government, which is in turn made up of people whom the voters choose.

Ann Teo of Rose echoed Azrul’s suggestion to participate in civil society and said, “Come and volunteer and participate in our core activities centred around voter empowerment and increasing democratic spaces through citizens’ participation.”

She also made the call for all, in particular young adults, to register as voters and to go out to vote in the coming general election, describing it as the least that every citizen should do: exercise the right to vote and elect the representatives of their choice.