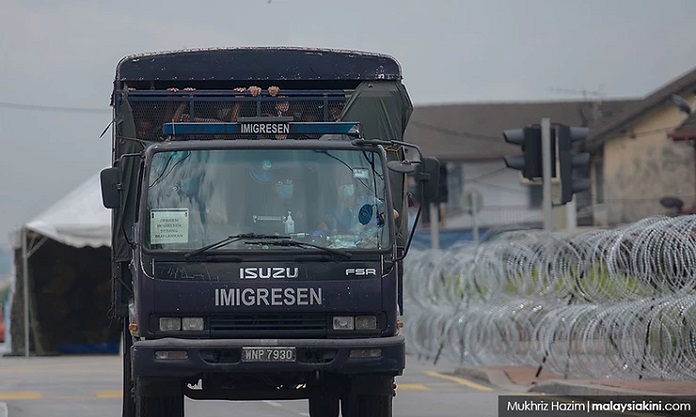 Lawyers for Liberty (LFL) refers to the recent statement by the Immigration Department that all foreigners with expired social visit passes would be required to leave the country by 21 April 2021.

This abrupt announcement failed to account for the difficulty faced by foreigners to arrange for their return to their respective home countries at such short notice.

Alarmingly, we have seen news reports that even Myanmar nationals, whose country is in the midst of a political turmoil, are also forced to return home, in spite of the dangers that might befall them should they do so.

It is entirely unreasonable for the Immigration Department to treat foreigners overstaying in Malaysia as if they are doing so deliberately; many have been stuck here due to travel restrictions caused by the coronavirus pandemic, and their undocumented status is due to the inability of the Immigration Department to facilitate their predicament during this unprecedented time. They should not be viewed or treated as criminals for overstaying.

LFL views this announcement as a part of a series of unreasonable actions by the government in its crackdown against migrants and refugees. Earlier this year, Malaysia deported 1,086 Myanmar nationals despite a court order halting the repatriation, breaching its international obligation of non-refoulement and potentially dooming the lives of Myanmar refugees and asylum seekers.

The Immigration Department is seen to be allowed to run afoul of the law; another glaring example was the illegal incarceration of Simon Adavize Momoh, who despite having paid his fine for a drink-driving offence, had been detained for a month as he was deemed an “undesirable immigrant” under Section 8 (3)(d) of the Immigration Act. This was an arbitrary and inhumane exercise of power by the director general of Immigration, especially as it is likely that they did not inform Simon or his family of his sudden status as an “undesirable immigrant” before he was detained.

READ MORE:  Heidy Quah on fighting for and empowering refugees

These actions by the authorities are a progression of an increasingly regressive immigration policy, a continuation of its unjustified crackdown against migrant workers during the peak of the pandemic last year. We can draw no other conclusion other than that the government is encouraging and implementing xenophobia in its policies and enforcement of the law with absolute disregard to the impact it has on all foreigners who are currently in Malaysia.

Continuing down this destructive path may negatively impact Malaysia’s international image and foreign relations. We strongly urge the government to stop its ongoing crusade against migrants and employ a more compassionate and reasonable policy during this troubled time.