The new government must demonstrate its commitment to human rights, justice and the rule of law by abolishing the death penalty, the Sedition Act and all laws that allow detention without charge, says Malaysians Against Death Penalty and Torture (Madpet).

Madpet and possibly many others will see Malaysia, under a new Pakatan Harapan government, being more open and ready to accept recommendations and make positive commitments, even agreements, to ensure greater human rights, justice and the rule of law in Malaysia.

The UPR is a process where Malaysia’s human rights record will be reviewed by other UN member states, who will also make recommendations on what Malaysia should do to improve its state of human rights, justice and the rule of law.

The UPR process, under the auspices of the Human Rights Council, also gives opportunities to human rights defenders and civil society an opportunity to submit reports, arguments and even recommendations. Many, including Madpet, would have done so and tried to lobby other countries to highlight human rights failings and to urge Malaysia to be more committed to human rights and the rule of law in accordance with universal standards.

Now, this UPR process leading to the actual face-to-face session in a couple of days to review the situation began when Malaysia was governed by the previous Barisan Nasional (BN) government, which obviously had little regard for human rights, justice and rule of law.

Malaysia, in the past, has even avoided ratifying or being a signatory to many of the fundamental UN human rights conventions.

Core human rights conventions that Malaysia has not yet ratified

Being a member of the United Nations, Malaysia accepts the Universal Declaration of Human Rights. But so far it has failed to ratify or sign the International Covenant on Civil and Political Rights and the International Covenant on Economic Social and Cultural Rights. Without the ratification/signing of these two covenants, there is really no clear proclaimed commitment to the principles of human rights found in the Universal Declaration.

Now, that Malaysia has decided on the abolition of the death penalty, there is no more reason for the country not to ratify/sign the Second Optional Protocol to the International Covenant on Civil and Political Rights Aiming Towards the Abolition of the Death Penalty.

Many countries have ratified many human rights conventions and treaties – but alas have failed to practise what they have agreed to. It is a basic principle of international law that a state party to an international treaty must ensure that its own domestic law and practice are consistent with what is required by the treaty.

In some countries, once a convetion is ratified at the international level, the convention may automatically form part of national law. In other words, the convention would be directly enforceable by national courts and other implementing authorities.

In some other countries, the legislature might have to adopt an act of ratification at the national level. This may have the effect of incorporating the convention into domestic law.

Malaysia should pass a law that ensures that any convention once ratified/signed, shall automatically form part of national law.

Alternatively, in Malaysia, this may be done by the tabling of a bill in Parliament to adopt and accept the contents of the each and every convention ratified/signed by Malaysia as part of national law. This will be more tedious as it requires separate bills to be tabled every time a new convention is ratified/signed.

Madpet believes this is best, compared to the old BN government practice of amending all relevant legislation to ensure compliance with the principles and contents of the convention already ratified/signed by Malaysia.

Cedaw, for example, was ratified/signed in 1995, but the process of amending so many different laws to make them to be in compliance with the Cedaw principles and content has taken far too long. And we are still not sure whether all relevant Malaysian laws have been amended to be in line with Cedaw. The same situation applies to the convention on the child.

If however, Cedaw was incorporated into Malaysian law by an act of Parliament, then if in court, if any provision of some existing law is found to be not in compliance with it, judges could simply reject such laws or the use of it on the grounds that they are inconsistent with Cedaw.

The adoption of UN conventions as part of Malaysian law by Parliament would enable our judges and courts to immediately consider the arguments that certain provisions in certain written laws and past judgments in fact contradict the conventions that Malaysia ha already ratified/signed.

At the same time, existing legislation will be amended to be in compliance with the ratified/signed UN conventions. Even if the courts later discover some provision in some law that is not consistent with a ratified/signed UN convention, there would be no injustice if Malaysia has already by law made the convention part of Malaysian law. The odd law, discovered by court, to be non-compliant could then be simply amended in the upcoming parliamentary session.

Madpet hopes that the new Malaysian government will take the position of immediately passing laws recognising and accepting UN vonventions ratified/signed by Malaysia to be part of Malaysian law.

The UPR process commenced when Malaysia was still governed by the Umno-BN government, and as such, things would have changed under this new Pakatan Harapan-led government under Prime Minister Mahathir Mohamad, who is seen as being more committed to justice, human rights and the rule of law.

There is, as such, less need to push Malaysia through recommendations and lobby, as this new government would definitely do what is required to ensure that there is greater justice, human rights and rule of law in Malaysia.

The call to abolish the death sentences and protect the rights of the indigenous people were the top two recommendations given to Malaysia by most United Nations members at the last UPR of Malaysia in October 2013 (Malay Mail, 25 October 2013).

But following the recent cabinet decision to abolish the death penalty and the assurance that the relevant bills would be tabled in the current parliamentary session (ending on 11 December 2018), UN member nations and others may be likely to use their limited about three-minute intervention to make recommendations in other areas of human rights.

Madpet calls on the Malaysian government to:

Charles Hector issued this statement on behalf of Malaysians Against the Death Penalty and Torture (Madpet). 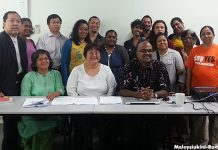