A string of civil society groups have expressed shock at the news that another six Burmese migrants have died while in detention in Malaysia because of a suspected waterborne disease.

We are shocked and disappointed to hear that another six Burmese migrants have died while in detention in Malaysia because of a suspected waterborne disease. Leptospirosis is caused by exposure to water contaminated by animal urine, like rat urine. (Straits Times, 25 September 2009, Migrants die in detention/ Associated Press, 24 September 2009).

From our investigation, the names of three of those who have died are So Thein [Prison Body number 0853, Block B1, Ethnicity: Burman, Age: 36], Min  Khaing [Body number 5009, Ethnicity: Karen, Age: 23] and Min Nown [Ethnicity: Arkan, Age: 28]. The other three are of Chin ethnicity. It seems that the deaths happened in August.

This time the deaths seem to have occurred at the Detention Centre at the KL International Airport (KLIA) depot. The Straits Times report states that an official had informed them that “the detainees likely contracted the disease in another centre. They were transferred together with some 700 others after a riot there”. In an earlier report (The Star, 24 July 2009), it was stated that “some 700 Myanmar illegal immigrants involved in a ruckus at the Semenyih immigration depot early this month have been moved to the department’s KL International Airport (KLIA) depot”.

It must be noted that this is not the first case of death by reason of Leptospirosis. Sa La Hin, 26, and Thang Hoih Ping, 21, two Burmese migrants, died in the Juru Immigration Detention Centre from Leptospirosis in May 2009; 127 civil society groups and organisations responded via a joint statement entitled ‘Death of two Burmese indicative of state of detention places in Malaysia: Denial of health care is a violation of right to life’.

After the leptospirosis outbreak in the Juru Detention Centre in Penang in May, Immigration Director-General Abdul Rahman assured us that the cleanliness and hygiene at immigration depots nationwide will be stepped-up to ensure safety of staff and inmates there against contracting infectious diseases (Bernama, 19 May 2009).

Suhakam via a letter dated 16 July 2009 had informed us that they had met with the Director General of Immigration on 4 June 2009, and amongst others, had recommended that “as a measure to control contagious diseases to ensure that all immigration detention centres should have a doctor or medical officer in line with international requirements, and that cleanliness of detention centres should be taken care of”.

It must also be borne in mind that last year Suhakam identified medical care as an overriding reason why 1,300 detainees have died over the past six years, and had made recommendations to the government. At present the 22 centres throughout Malaysia do not have a permanent clinical dispensary manned by doctors or a medical assistant to help detainees (ABC News, 28 May 2009).

In May 2009, it was reported that about 26 were admitted to hospital following a leptospirosis outbreak in the Juru Detention Centre, and they survived, and this leads us to believe that prompt access to health care can avoid death. It is shocking that in this recent case, six have died. What is more disturbing is that there seems to have been no reported disclosure by the Malaysian authorities on this. We still do not know the number of detainees that have been affected this time.

After the recent deaths and outbreak in the Juru Detention Centre, one would have expected the Malaysian government to have taken immediate steps to ensure that there are no more cases of leptospirosis and deaths. We wonder also whether the authorities took a lackadaisical attitude and did not even conduct a thorough investigation to determine the source of the contamination that caused that outbreak. Results of such investigations will not only determine liability, but would also ensure that further deaths from leptospirosis could be avoided.

We, the undersigned, call on Suhakam to immediately commence a public inquiry into these deaths and detention places generally and come up with concrete recommendations which could be implemented that will improve the state of cleanliness, hygiene and health care of all detention places in Malaysia. It was sad that Suhakam decided not to carry out a public inquiry after the Juru deaths in May.

We are also call upon the Health Ministry and the Malaysian government to conduct a thorough investigation into the cause of this leptospirosis outbreak, which is reported to have already resulted in six deaths.

We also call for the resignation of Immigration Director-General Abdul Rahman, considering that this is the second reported case of deaths by reason of leptospirosis at immigration detention centres within the last four months.

The Malaysian government must take necessary action to ensure that proper steps be taken so that such disregard for life does not happen again.

With regard to those who have died, their family and/or dependents should be given adequate compensation by the persons responsible, the detaining authority and the Malaysian government.

Officers and persons responsible for the acts or omissions that resulted in death and suffering should be charged and prosecuted for these crimes. They should not be permitted to hide behind safeguards provided to public servants, which unfortunately only promotes a culture of impunity with no sense of responsibility and respect for human life.

For and on behalf of the 21 organisations/groups listed below:

Poems: The Bereaved and Exit Plan 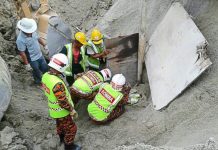