The Malaysian Bar lauds the 23 July 2018 press statement by Attorney General Tommy Thomas calling for the review of Order 53 of the Rules of Court 2012, which relate to the procedural requirements for applications for judicial review.

The specific requirement in question is in Order 53 Rule 3(3), which provides as follows:

The applicant must give notice of the application for leave not later than three days before the hearing date to the Attorney General’s Chambers and must at the same time lodge in those Chambers copies of the statement and affidavits.

Doing away with the requirement of service of all cause papers on the Attorney General’s Chambers (except in cases where the Attorney General’s Chambers will represent the respondent at the inter partes stage or when invited by the courts to assist) will promote and facilitate applications for judicial review in matters of constitutional law and administrative law and will significantly enhance access to courts and justice.

The Malaysian Bar commends the attorney general’s recognition of the need to further develop and promote judicial review, which is fundamental to building independent and robust institutions that uphold the rule of law.

In this regard, the Malaysian Bar has repeatedly called for the repeal of all ouster clauses and the restoration of judicial power of the federation in the judiciary. Ouster clauses exclude judicial scrutiny and are thus an affront to the judiciary. They are also contrary to Article 8 of the Federal Constitution, which guarantees equality and equal protection before the law.  Further, ouster clauses are against the fundamental concept of justice, as they seek to exclude the right to the due process of law and access to the courts.

READ MORE:  No political stability without governance and institutional reforms

The Malaysian Bar also welcomes the attorney general’s pledge not to seek costs in judicial review proceedings (unless exceptional circumstances warrant it).  In so doing, the attorney general has set a positive and progressive tone for public law litigation, by eliminating any deterrence that may have been caused by the risk of incurring high costs in such matters.

The Malaysian Bar supports the attorney general in his move away from prior practices that were stifling, and stands ready to assist towards reforming public law litigation. 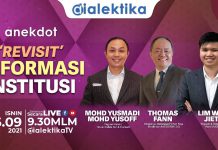 No political stability without governance and institutional reforms