Malaysia’s leading political cartoonist Zunar has condemned the action of the police and officers from the Home Ministry who confiscated his book “1 Funny Malaysia” from bookstores in Penang, Malacca, Negeri Sembilan and Kuala Lumpur recently. According to news reports, the raids were carried out under Section 18 of the Printing Presses and Publications Act.

For the record, the book has been in the market since November last year, and most of my work in the book had been published on Malaysiakini.

This is the second book of mine to be confiscated in recent months. In August last year, my office in Brickfields, Kuala Lumpur was raided by eight officers from the Home Ministry and 408 copies of the inaugural issue of my cartoon magazine, Gedung Kartun (Cartoon Store) were seized.

The next day, the Home Ministry officers raided the factory that printed Gedung Kartun and seized 18 printing plates of the magazine.

This high-profile murder case is the most talked-about issue in Malaysia. Even though two low-ranking officers were convicted in court, public opinion still presumes the involvement of a high-ranking politician.

As a cartoonist, it is my duty to highlight current issues in my cartoons that are in line with the people’s aspirations. It has been my cartooning philosophy to tell the truth and give correct information through my work.

Is it wrong to be telling the truth or opinion through cartoons? Does this mean that the Altantuya issue is forbidden in Malaysia? Is there anything to hide?

Based on these circumstances, I firmly believe that the action is purely politically motivated. I am sure there will be no action taken if the content is siding with the ruling party.

It is also a total violation of press freedom, freedom of expression and the principles of democracy.

I hereby condemn the action by the Home Ministry and the police, and urge them to return the confiscated copies.

As a cartoonist, I will not stop exposing the wrongdoings of the authority. In fact I have just released a new cartoon book called “Sumpah di Bumi Komisen” which highlights the same issues albeit in a different light. 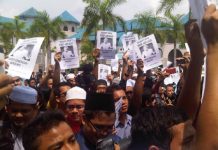 Saudara Zunar, you are the voice of conscience, the single candle that dispels the darkness of night. However, we fear for you…. May you not be forced to take up residence in a foreign land, such as our dear RPK.

Yes, it would be correct to assume that the aforementioned issue is indeed forbidden in “Boleh Land.” To even bring it up publicly, much less continue to question the “official findings,” might most probably bring only sadness and misery…