Farmers from across Asia have protested against the  International Rice Research Institute (IRRI) based in the Philippines for its programmes which have wreaked havoc on farmers’ fields, reports Grain.

On 12 April 2010, close to 1,000 farmers from different parts of the Philippines, joined with representatives of farmers organisations from other Asian countries such as Cambodia, India, Malaysia, Nepal, Pakistan and Vietnam, to gather at the main gate of the IRRI in Los Banos, Laguna (Philippines). Inside, IRRI celebrated its 50th anniversary, while outside these farmers were calling, once and for all, for IRRI’s abolition. Another 2000 farmers in Bacolod City and North Cotabato, in central and southern Philippines respectively, did parallel rallies in solidarity with those in Los Banos. Through phone messaging, they shared with the protesters at the IRRI gate their firm resolve that IRRI’s 50th year should be its last.

“What is golden with IRRI’s golden anniversary? The Philippines is the world’s top rice importer now,” according to Congressman Rafael Mariano, Anakpawis party list representative, who took the blazing afternoon sun to join the farmers.

As expected, none from IRRI’s top management came out. Here was an Institute that claims to feed half of the world’s population, yet it couldn’t face these poor farmers who spoke about the three million people who have already died of hunger since the start of this year, while 1.23 billion suffer from malnutrition. Here was an Institute that proclaims to be the home of the Green Revolution in Asia, yet it couldn’t afford to hear the real accounting of how its programmes have wreaked havoc on farmers’ fields across the region. Here was an Institute that vows to improve the health of rice farmers and ensure that rice production is environmentally sustainable, yet it refuses to acknowledge the casualties of its chemically-laden rice research operations. Several former field workers of IRRI died over the years from their exposure to hazardous chemicals while others, who were in the protest, continue to suffer from pesticide-related symptoms. Had anyone from IRRI’s management or trustees come out, they would have heard from several organisations in Asia that pesticide poisoning remains rampant among rice farmers who plant IRRI-developed varieties.

Support the struggle to build a Malaysia based on Justice, Freedom, Solidarity:
READ MORE:  Why are we still subjecting our people to colonial-era land laws?

“The land that now houses IRRI were acquired from us farmers who were promised employment at IRRI, which has tenure that could be passed on to our children. What IRRI did however was terminate us even before we could get to our retirment. Some of us have already died from pesticide-related illnesses, and not one of our children could even find employment at IRRI. IRRI is a liar and we should get rid of it,” according to one former IRRI field-worker who were among those whose lands were acquired by the University of the Philippines (UP) for the use of IRRI back in the late 1950s.

“IRRI is like a broker for large TNCs (transnational corporations). It was used as an intrument to promote the notion that pesticides are necessary for farmers to grow rice. But as a result, this has caused many forms of illnesses on the liver, kidney, brain, among farmers, and even still births. We have to put a stop to this,” says Dr Romy Quijano, a toxicologist from UP.

“We do not believe that IRRI’s rice research is for a better world. What IRRI is doing is rice science for a bitter world, for a corporate world, for TNCs world,” according to Anakpawis’ Mariano.

IRRI should understand that the action in front of their gate was not merely about closing IRRI. The farmers had no illusions that IRRI would voluntarily heed their call. But 12 April was historic nonetheless. It was a day for farmers from across Asia to make it clear that, for them, IRRI has lost whatever legitimacy it once had in rice research and farming. As the farmers said very emphatically: 50 years is enough. It was not a gentle request for IRRI to close shop. It was an indictment on IRRI’s future.

“IRRI is the enemy of the Asia’s peasants. We want it out of the Philippines or anywhere in Asia. We want IRRI out now because it has done nothing for the people. IRRI is useless,” according to Erpan Faryadi of Alliance of Agrarian Reform Movement in Indonesia.

A brief slideshow of the April 12 event at IRRI: http://www.youtube.com/watch?v=u0OywScv1Lk

50 Reasons why IRRI should be shut down: http://www.grain.org/hybridrice/?id=418

Why are we still subjecting our people to colonial-era land laws? 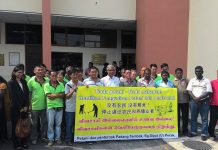