Progressive groups are warning that if vicious austerity measures are successfully implemented in Greece, workers in other European countries (such as Portugal, Spain and Italy) could bear the brunt of the next round. And it won’t stop there.

We, left and progressive organisations from the Asia-Pacific region, express our solidarity with the resistance of the Greek people against the harsh austerity being imposed upon them by the governments of the European Union (EU) and the International Monetary Fund (IMF). The proposed “rescue package” for the Greek economy by the IMF-EU has triggered a huge struggle that will have worldwide ramifications for working people.

On 5 May, as Greece’s parliament debated the package, at least 500,000 people took over the streets of Athens as part of a nationwide general strike, the largest demonstration in Greece in 30 years. The general strike involved half of the working population of Greece.

Protests are continuing across Greece, and the trade unions and left organisations have vowed to resist implementation of the austerity package. Protesters marched again in huge numbers on 6 May, as the Greek parliament voted to adopt the package.

Strikes and demonstrations against the package continue.

At the root of this struggle lies the fundamental question: Who will pay for the global capitalist economic crisis — the working people suffering most from its effects or the powerful bankers and rich capitalists who caused it?

This is an attempt to shift the cost of the crisis onto working people. The Greek workers did not cause the financial crisis, yet they are being told they must suffer as a result.

The very financial markets that were rescued by government bailouts that followed the global financial crisis are now demanding massive cuts in public expenditure and public services, and a new round of neoliberalism.

In Greece, this includes:

·       Freezing of wages and retirement pensions in the public sector for five years;
·       Making it easier to lay-off public servants;
·       Increases in the regressive goods and services tax rates;
·       Increased taxes on fuel, spirits and tobacco;
·       Increases in the retirement age for women and men;
·       Greater restrictions on access to a full retirement pension; this pension will be calculated on the worker’s average salary over their working life, instead of their final salary (a net cut of 45-60 per cent);
·       Government spending cuts of 1.5 billion euros (less money for education and health care) and public investments will also be reduced by 1.5 billion euros;
·       A new minimum salary for youth and long-term unemployed;
·       Greater deregulation of the economy and more privatisation.

If the vicious austerity measures are successfully implemented in Greece, workers in other European countries (such as Portugal, Spain and Italy) will be the next. But it won’t stop there. The working people of every country have a stake in the success of the resistance of Greece’s working people in stopping the attacks on their living standards.

In the response to the attacks, the Greek mass movement’s demands include:

·       Refuse to pay the debt;
·       Public and social control of the financial system, including nationalising banks;
·       Re/nationalisation of businesses and public utilities with strategic importance, with public and social control;
·       Increase salaries and pensions. No increase in the retirement age. Increase job recruitment and freeze lay-offs.
·       Increase tax rates on big capital, increase taxes on large real estate and stock transactions;
·       Slash military spending;
·       Increase spending on health and education, unemployment relief and spending on social infrastructure. No commercialisation of education and health;

The capitalist system is inhuman and offers no future for working people. A victory for Greece’s workers will strengthen our fight against capitalism’s onslaught all over the world.

The massive struggle and spirit of defiance shown by Greece’s workers have inspired us. The signatories of this statement support the Greek people’s protests and offer our unconditional solidarity with those mobilising in massive numbers to fight the austerity measures.

UN ‘sustainable’ development goals hijacking our compassion for the world 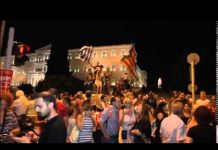 Solidarity with people, government of Greece: ‘Your struggle is our struggle’