Save Rivers reports on a disturbing episode in Mukah in Sarawak.

Mukah – Iban people from six villages in the Ulu Kelawit Tatau gathered in front of the Mukah police station for two days to peacefully protest the arrest of 11 community members who have been detained since 25 October.

The arrests happened in response to a peaceful blockade set up by the communities in opposition to a rock quarry and oil palm company that has polluted and destroyed their water source and taken their land allegedly without proper compensation.

The Mukah police forcefully arrested 10 Iban men and one Iban women during a raid. Eyewitnesses at the site of the blockade allege that men in police uniforms arrived and burned their blockade, hit a woman, burned their cultural artefacts, confiscated and burned their handphones, carted away some of their property, and destroyed the rest of their camp.

Three companies have been working in the area of the Ulu Kelawit-Tatau since 2012.

The oil palm company originally compensated the villagers for their land but has allegedly discontinued payments.

After the oil palm company came in, the sandstone rock quarry company started operations in the vicinity.

These companies, and particularly the operations of the rock quarry, have allegedly destroyed the Besangin River, the villagers’ river source.

At first the water became extremely poisonous and polluted and killed their paddy fields and crops. And then the river completely dried up. With the loss of their water source, the villagers have lost their source of livelihood as they are no longer able to grow crops or fish on the river. They have also lost their source of food and drinking water.

When the villagers began to notice the impacts of these companies on their rivers, they wrote letters to their village heads and the companies, requesting a discussion about how to resolve the situation.

One man was arrested on 20 October and was released four days later. On 25 October, police allegedly brutally burned and tore down the blockade, arresting an additional 11 people.

Villagers arrived at the Mukah police station yesterday, 29 October, to hold a ceremony and prayer session, including Iban rituals of miring and taboh.

Police said that the people they are holding would be released today, 30 October, but they continue to come up with reasons to delay their release.

Nasar Anak Nawing from the 16th km of Tatau Road, who was the first to be arrested, said, “What is the role of the police? Is it to protect the interests of the big companies or is it to see there is justice for all? We were not looting; we were not violent, but we were there to protect our land and livelihood and to protect our rivers from being destroyed.”

Describing the scene, Imuk Anak Imang from Rumah Tandang said: “The police came without any warning and without telling us. They collected our handphones and they were wearing masks. One of them shouted, ‘Arrest them! Arrest them!’” 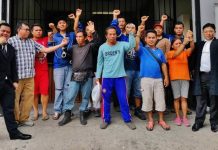 11 Ulu-Kelawit-Tatau villagers released but not relieved

But, I am shocked that the police enforcers did this when social media is so widely used? And why would they cover their faces? Staged? Something doesn’t sound right, no? They assume some videos might be taken, despite the confiscation of the villagers’ devices, there were bystanders, no?

Lodge another report at Sibu, if not KUching, if not Bukit Aman , the HQ This is absurd. Gangster??? Don’t think ulu places, mkney is king. Go at Laws, if not how can maintain the peace? …

Bukit Aman has to conduct a thorough investigation into this case. Legally and morally, we want to know what are the roles of the police in this case. If their role are merely to protect the big company or vvip who have personal interest in this company, the police department have to disclose it to the public. The MACC are duty bound to look into this as well.