The Association for Community and Dialogue is puzzled by MCA central committee member Chew Kok Woh’s criticism of DAP MP Charles Santiago for being a signatory, together with 200 parliamentarians and policymakers from 23 countries, to a memorandum criticising China for proposing national security laws in Hong Kong.

It is obvious that Chew’s thoughts stem from typical MCA-type politics, where business relationships triumph over human rights issues.

I would like to ask the MCA leader where he was when the US was negotiating the Trans-Pacific Partnership Agreement with Malaysia and other Asian countries during the Barack Obama years. According to experts, the very nature of the deal was to curb the rise of China.

The agreement could have contributed to the surrendering of Malaysia’s sovereignty to big American corporations, and at the same time, strained economic relations with China. Santiago was among the MPs who stood up against the proposed agreement.

The concern among human rights groups is not about China’s rights to protect its own integrity, but how Beijing deals with dissent in the mainland and how such practices could be exported to Hong Kong, whose citizens enjoy freedoms unseen in the mainland.

One has to keep in mind that many prominent dissidents, intellectuals, religious leaders and those with a different worldview from the Communist Party’s have been jailed in China over the decades on the grounds that they are a threat to national security, when in fact, they are opposed to the authoritarian regime’s worldview, and not the country’s integrity and sovereignty.

Having said that, one also has to keep in mind China’s legitimate concern about foreign interference and the instigation of Hong Kong citizens, which could lead to a secessionist rebellion.

The current US administration has taken a Cold War path towards China, and the security laws could be used as a propaganda tool to discredit Beijing. This is where democracy activists in Hong Kong have made themselves vulnerable to the Chinese security plans in the financial hub.

It is obvious that signatures alone are not effective. MPs from around the world should make it clear to Hong Kong activists that foreign government intervention to destabilise China is not acceptable, and an authentic dialogue between the Chinese government and Hong Kong stakeholders should be encouraged, based on the spirit of Hong Kong’s Basic Law.

This should be the way forward, where the twin evils of authoritarian rule and imperialism are opposed, and at the same time, dialogue is initiated.

It is time for MCA leaders to have some political conscience in upholding human rights both domestically and globally.

Santiago has shown that he opposes authoritarianism and economic imperialism. What he needs to do with parliamentarians from around the globe is encourage dialogue between Beijing and Hong Kong stakeholders. 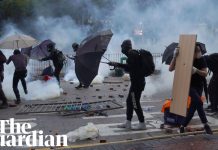