Hakam supports the government’s proposal to amend the Federal Constitution in order to grant youths aged 18 and above the right to vote.

Hakam believes that the right to vote is commensurate to the responsibility expected of 18-year-olds under the law. An 18-year-old can be held fully accountable for committing crimes. He or she can serve in the military and police force.

If society expects 18-year-olds to be mature enough to know right from wrong, as well as to die for their country, then certainly society must acknowledge that they are equally mature enough to vote.

Hakam also believes that youths have a right to be heard and to have their interests taken seriously by politicians. There are many issues which youths are concerned about such as climate change, environmental degradation, education policies and mental health.

Youths should be given a say in the ballot box regarding these pressing issues which would significantly affect their generation – more so than others.

Further, this landmark constitutional amendment will inject greater political awareness among youths. Democracy, rule of law and appreciation for human rights will only thrive if the next generation of leaders are actively engaged and care about national policies.

Regionally, Malaysia and Singapore are the only countries in Asean which restrict the voting age to 21. All others are set at 18, while Indonesia allows 17-year-old citizens to vote.

Globally, Malaysia lags even further behind – around 90% of democracies allow 18-year-olds to vote. Some countries have even allowed or have embarked on serious conversations on lowering the voting age to 16.

READ MORE:  What do youth activists want next after Mahiaddin's resignation?

Hakam urges all political parties to support this historic constitutional amendment to empower and finally give Malaysian youths the recognition they deserve.

Time to shake up the ‘old’ politics and faces 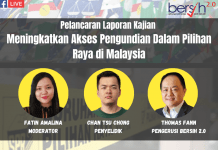