The Malaysian Bar is dismayed to hear that the Subang Jaya Municipal Council (MBSJ) has decided to sue Koh Tat Meng, an animal activist, for defamation.

It is reported that the suit was initiated against Koh Tat Meng pursuant to him filing a civil suit against MPSJ in December last year. The news report also detailed the allegation of assault by council officers and the charging of Koh Tat Meng under Section 186 of the Penal Code for “obstructing a public servant in the discharge of his public functions”.

The decision to sue for defamation would appear to be acceptable in light of the Federal Court decision in Chong Chieng Jen v Government of State of Sarawak, where the apex court held that a public authority has the right to bring a civil suit against an individual for defamation.

However, the Malaysian Bar has grave reservations about this ruling, which creates a chilling effect on public discourse by effectively enabling the government to repress views, curtail expression and news reporting, and restrict democratic space through the threat of defamation suits.

When the government is the subject of a suit, it should make all efforts to explain and be responsible for the decisions and actions of its officers.

The role, responsibilities and vast powers held by the government necessitate such continuous scrutiny and constant vigilance to maintain the scales of power. This is especially so in situations such as this, where there is an allegation of abuse of authority and force.

The solution lies not in initiating a counter suit for defamation but in replying to or rebutting such allegations with appropriate evidence during the trial.

READ MORE:  Don’t ban Tommy Thomas’ book. Get a QC to rebut the book, as was done with May Day For Justice!
Support the struggle to build a Malaysia based on Justice, Freedom, Solidarity:

The government, as a public body, cannot take offence in the same manner that a private individual may.

Further, the public purse should be better utilised in service of the public as opposed to pursuing protracted litigation.

This decision by the MPSJ does not bode well for the [previous] government’s efforts in opening up the democratic space and in fostering public trust and confidence.

The Malaysian Bar therefore calls on the government to promulgate policy that forbids the utilisation of defamation suits by any government in this country; and reaffirms its call to immediately introduce legislation, in the coming session of Parliament, to undo the effects of the Federal Court decision and to ensure once and for all that no government in this country will be able to resort to such legal action.

This piece dated 21 February 2019 is reproduced from here and has been edited for style only.

Don’t ban Tommy Thomas’ book. Get a QC to rebut the book, as was done with May Day For Justice! 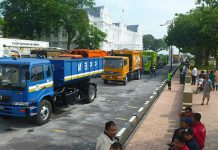