ULU BALINGIAN, 5 April – Gangsters seems to be running the show in the current native customary land dispute between a logging company, Bitani Maju Sdn Bhd, and the Iban communities of Sungai Tepus in Ulu Balingian.

A group of gangsters in 10 cars have been intimidating the natives ever since the natives set up a blockade on 12 March against the logging company.

The blockade has since been dismantled by the police; however, the natives have continued with their protests.

Surprisingly, it is the police that are guarding the company workers carrying out their illegal logging operations.

Last Saturday, two of the longhouse members from Rumah Osay were assaulted by a group of gangsters while they were on their way home from Selangau bazaar. One of them managed to flee but another was badly beaten up by the gangsters.

According to Banyau Ak Timbang, the person who managed to flee from the gangsters, “I was riding together with Oren Ak Linggang from Selangau bazaar and as we were about to approach our longhouse junction, a car approached us. I noticed Penghulu Thomas Jawa Ak Latu was in the car and the driver of the car forced us to stop.”

“The other occupants of the car came out and we did not recognise them at all. We got into a heated argument with them and then suddenly they started attacking us,” said Banyau.

Banyau said he managed to escape from his attackers but Oren was left behind.

According to Banggau Ak Panggai, Chaiman of their Joint Action Committee called Gerubat, “I told Oren to lodge a police report about the attack at the Balingian Police Station the next day. However, instead of taking down his report, the police arrested Oren.”

“The gangsters seems to be controlling the police and also our community leaders,” claimed Banggau.

“Our communities are living in fear at the moment as the police cannot guarantee our safety. We do not want any untoward incident to happen; so we appeal to the police to take action and stop the gangsters from harassing us any further,” said Banggau. 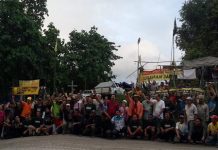