G25 is concerned over reports that the Perikatan Nasional government plans to table in Parliament a bill to amend the Syariah Courts (Criminal Jurisdiction) Act 1965 (Act 355) and a bill on the Control and Restriction on the Propagation of Non-Islamic Religions.

Both these bills will be seen as politically motivated in light of the upcoming general election. Moreover, the passing of these bills into law will exacerbate the racial and religious inequalities among the rakyat of this country and destroy our social fabric.

Such legislation will be viewed by local and foreign observers as yet another retrogressive step towards national unity and stability.

Although it is said that all is fair in love and war, this saying should not extend to politics because of the irreparable damage the politics of race and religion can do to the economy. As we have seen in several Muslim countries, when the economy is broken, it does not take long before the country becomes a failed state.

G25 would like to remind our politicians of the reality in Malaysia that the country’s economy and the creation of new income and employment opportunities depend on the expansion of the private sector.

Malaysia has traditionally been an economy in which private enterprise and commercial organisations decide what and in which activities to invest, produce, sell, export and import.

Although the role of the government in the economy has grown substantially since the introduction of the New Economic Policy in 1970, the fact remains to this day that private local and foreign investment together with domestic consumption still accounts for the bigger share of economic growth and job creation. Thus, although government expenditure and its public services are important for our daily life, most of the 14 million in the Malaysian workforce depend on the private sector to put food on the table.

Support the struggle to build a Malaysia based on Justice, Freedom, Solidarity:
READ MORE:  The future of freedom of religion and belief in Malaysia

The government’s own five-year and longer-term economic development plans make this abundantly clear. The whole basis of the shared prosperity vision to replace the government’s race-based socioeconomic policies under the New Economic Policy (NEP) is premised on the assumption that the private sector will continue to provide the economic engine to generate sufficient resources for the government to have enough to distribute the fruits of growth to the poor and needy, irrespective of race and religion and across all states.

As distributive justice is fundamental to our national unity, peace and stability, the government has always emphasised the crucial role of the private sector, both local and foreign, in drawing up its medium-term and long-term plans.

The proposed bills envisaged by the Prime Minister’s Department to strengthen the enforcement of Islam will have adverse effects on investor sentiment because when business leaders see race and religion becoming increasingly politicised and institutionalised into the system of law and order, they will worry that the whole governance structure in the civil service, the police and the judiciary will be sidetracked into supporting the dominant racial and religious groups at the expense of the minorities.

This will not be good for national unity and can lead to social and political instability. As Malaysians worry about the future, they will start moving their funds abroad for investing and safekeeping, and this will be accompanied by a brain drain as our top talents leave the country. All this will indicate a vote of no confidence in the future of the country.

Neighbouring countries are becoming more attractive to direct foreign investments, as seen in the latest United Nations Conference on Trade and Development (Unctad) report, which tracks the movement of such investments across all continents.

Malaysia has fallen behind other Asean countries, as shown in the Unctad report At one time, we were the highest recipient of direct foreign investments in Southeast Asia. Now, even local investment is weakening as local capital and talent leave the country.

All this movement of funds to outside countries is the reason why the ringgit is weak. A weak currency makes the country highly susceptible to imported inflation, and in every country, it is the poor who are worst affected when domestic prices rise due to inflationary pressures.

We call on our leaders to look beyond race and religion in making their policies because when investors and business leaders lose confidence in the future of the country due to internal instabilities, and Malaysians feel depressed with the worsening situation, all of us will have to pay the price for their short-sightedness in making decisions that affect all races and all states in the country, including Sabah and Sarawak.

The two East Malaysia states are already expressing their concerns about federal policies which ignore their cultural and historical heritage. The two bills that are proposed to be tabled in Parliament will create more tensions between regions in the country, depressing further the investment climate and the country’s economic prospects.

G25 is a civil society organisation as the voice of moderation on religion. 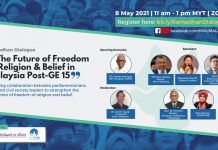 We need to see a victorious, progressive, enlightened Malaysia freed from the clutches of elitist political power and the dungeons that imprison our God given freedom, rights and gift of existence. Otherwise just be prepared for the repressive laws coming into the grips of the powers that be

We need far more than just a G25 voice of concern. We need all heads of the various faiths in the country to register their concerns. And we need all NGOs irrespective of their clarion calls to unify on this one concern. We finally need every ‘rakyat biasa’ to put behind all other issues and raise their collective concerns on this issue. We even need professional bodies and associations who shy away from politics to face reality. Politics governs their very existence in this country.

I did a double take of G25 concerns -“they will worry that the whole governance structure in the civil service, the police and the judiciary will be sidetracked into supporting the dominant racial and religious groups at the expense of the minorities.”
Unless, my take is incorrect, is this not what has been happening in Malaysia all these years?
The failed PH was not able to amend the bills of religion, to make it more agreeable to the masses. Why can we expect the pengkhianat nasional to do so?