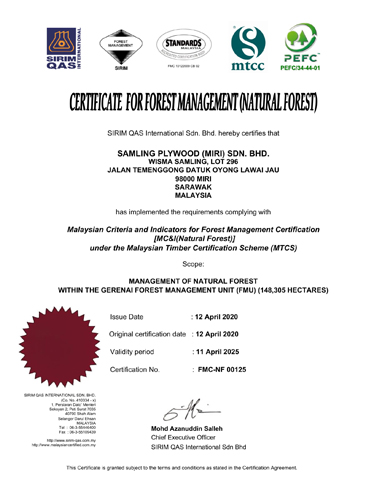 Save Rivers stands with Baram communities in calling on Sirim and the Malaysian Timber Certification Council to withdraw their certification until indigenous concerns are heard, understood and respected.

Miri, Sarawak – Communities in the Baram region are calling for the 148,000 hectare Gerenai forest management unit certification to be cancelled after it was revealed that the certification authority, Sirim, and the timber company Samling pushed through the permit during the coronavirus crisis, knowing that objecting communities had not been consulted.

“This certification is supposed to guarantee that Samling followed the Malaysian and international standards for timber, so that the timber can be sold off in European countries and Japan,” explains Sim Kit Chui, public relations officer for Samling. “Without this certification they won’t be able to sell any of that timber.”

According to the Malaysian Timber Certification Scheme (MTCS) guidelines, “indigenous peoples shall control forest management on their lands and territories unless they delegate control with free, prior and informed consent to other parties.”

According to the MTCS procedure, Samling is required to consult all communities affected by prospective logging. In reality, Samling conducted inadequate consultations with most communities in the Gerenai concession and failed to consult two objecting communities entirely.

Long Semiyang, a Kenyah village in the upper Baram, was technically consulted, but Samling’s superficial process meant that the community at large had no understanding of what was being agreed to.

“Why did Sirim give the certification for Gerenai when the villagers don’t know anything about it?” asks Danny Lawai Kajan from Long Semiyang.

“We don’t know what the certificate is for. This is very wrong and not the proper way to do things. There is supposed to be a meeting asking for the villager’s opinions, whether they agree to it or not.”

Far from consenting to the concession, the Kenyah Jamok village of Long Tungan and the Penan village of Ba Jawi have both actively opposed its application to their lands.

Long Tungan has repeatedly expressed a desire to both Sirim and Samling that it wants to protect its forests. “We are very worried about Samling’s logging activities in our area,” Jamok leaders wrote in a February 2020 letter to a senior Samling official.“In 2018, Samling illegally entered our communal forest for logging. At that time we discussed with representatives of Samling that we want to protect the remaining forests in our area. We are ready to discuss the matter with representatives of Samling.”

The Samling official dismissed the Jamok letter in early March, replying via email that “matters concerning allocation of forest areas, proposed land use, etc, are government issues over which Samling has no jurisdiction”.

This dismissal was in contravention of the MTCS guidelines and demonstrates the unwillingness of the company to take into consideration indigenous concerns.

“What is the point in going through the proper administrative channels to simply have your complaints ignored?” says John Jau Sigau. “We are working hard on a community conservation and ecotourism initiative to create long-term sustainable jobs in our forests, not to chop it all down for short term gain.”

In a letter addressed to the same senior Samling official, Penan leaders from Ba Jawi also wrote: “We have neither been informed about the ongoing certification process nor consulted. We are currently working to establish the upper Baram Forest Area. We do not agree with logging activities in our forest and request Samling to stop logging on our land.”

“But the story of Gerenai is just one of the many examples that demonstrate how the system is toothless in practice. Even when Samling does consult communities, the process is totally inadequate. If the MTCC does not follow its own guidelines, it is pointless at best and a serious human rights violation at worst.”

Save Rivers stands with the Gerenai community rights action committee in calling on Samling to release the environmental impact and social impact assessments for the Gerenai concession to affected communities as a matter of urgency.

Save Rivers stands with Baram communities in calling on Sirim and the Malaysian Timber Certification Council to withdraw their certification until indigenous rights and concerns are heard, understood and respected.