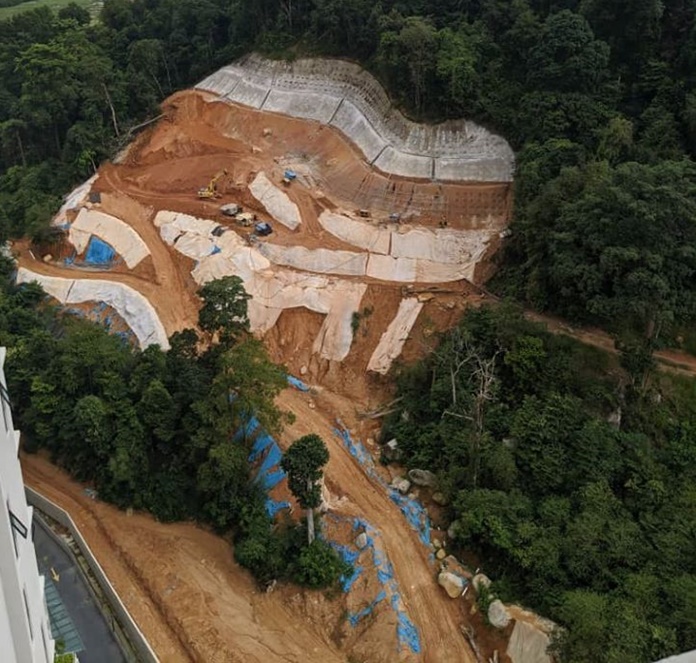 Sahabat Alam Malaysia (SAM) is gravely concerned and alarmed over earthworks and hill-cutting being carried out on very steep slopes at Mount Erskine in Penang, quite close to the Mont Residence apartments in Tanjung Tokong.

SAM was alerted to the hill-cutting by concerned Penangites, who shared pictures of the ongoing earthworks.

We understand that a significant part of the hill cutting involves slopes above 250ft (75m) and are on a very steep gradient above 25 degrees.

SAM has also learnt that in September 2018, Penang Hills Watch (PHW), an NGO initiative, alerted the state authorities and the Penang Island City Council (MBPP) about the hill- cutting activities.

We understand that PHW was informed that “mitigation works” were being carried out at the site, which is on land belonging to the state government.

SAM calls on the state authorities and the city council to explain what these “mitigation works” are and why such steep slopes are being cut and cleared?

The state policy under the Penang Structure Plan is to protect hill land and not allow earthworks on land above 250ft or on slopes which exceed a 25-degree gradient. Given that this is public land, we are alarmed that such hill-cutting and clearing is going on.

Further, we are concerned that with many parts of the slopes being bared, with this rainy season, serious soil erosion will result, contributing to landslips and flash floods in the area.

We are very worried about a repeat of landslide tragedies such as that at the Granito site and Bukit Kukus in Paya Terubong which led to the deaths of workers in the area.

The state authorities and the city council must provide an explanation urgently on the ongoing works and take urgent measures to prevent the likely environmental and social impacts caused by such hill-cutting and earthworks activities.

The city council’s response can be found in this Free Malaysia Today report.