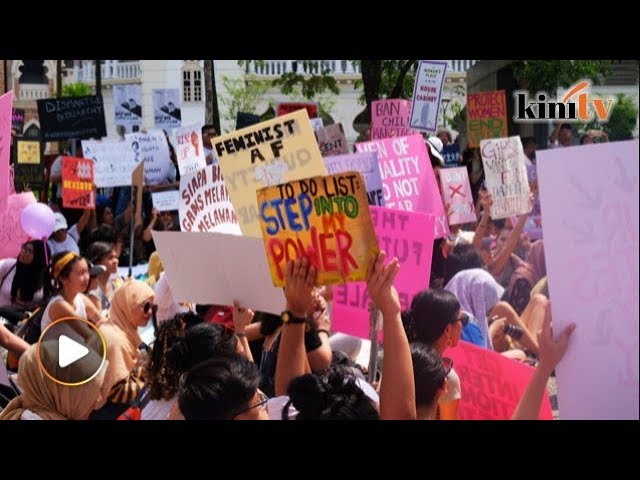 The Malaysian authorities should halt the investigation targeting organisers of the women’s march in Kuala Lumpur on 9 March 2019, Human Rights Watch said today.

The march’s organisers are being investigated for possible violations of the Sedition Act and Peaceful Assembly Act.

The women’s march, in observance of International Women’s Day, called for an end to violence based on gender and sexual orientation, the right of women to make choices over their bodies and lives, an end to child marriage and an end to a system of patriarchy.

“The Malaysian government promised in its election manifesto to get rid of the notorious sedition law, yet it is now using it against organisers of the women’s march,” said Brad Adams, Asia director at Human Rights Watch.

“This is shockingly hypocritical. The authorities should immediately end the investigation and restate its commitment to protecting the rights to peaceful protests and speech.”

The participants included a wide array of Malaysian citizens. Following the march, conservative groups criticised the presence of LGBT people, with the Minister for Religious Affairs, Mujahid Yusof Rawa, calling their participation an “abuse of democratic space.”

The backlash against participants has been vocal and severe, with some reporting harassment on social media, including threats of violence.

On 14 March the police called in seven organisers for questioning. In a statement, the organisers announced that they were being investigated under the Sedition Act – a law that has long been used to penalise peaceful political dissent.

The Sedition Act criminalises any conduct with a “seditious tendency,” such as broadly tending to “excite disaffection against” or “bring into hatred or contempt” the government, the judiciary, the king or the ruler of any state. The governing Pakatan Harapan coalition, recognising that the Sedition Act is “oppressive and unjust”, promised in its 2018 election manifesto to repeal it.

The organisers are also being investigated under Section 9(5) of the Peaceful Assembly Act, which requires organisers of assemblies to give police notice of any event 10 days in advance, a requirement that the government has also promised to review.

March organisers have told local media that they provided the police with notice 10 days in advance and maintained open lines of communication with the police during the event.

The Malaysian government should follow through with its campaign promises to repeal the draconian Sedition Act. It should also revise overly restrictive provisions of the Peaceful Assembly Act.

“Rather than using abusive laws against people marching for basic rights, Malaysia’s government should be addressing the critical women’s rights issues that the march highlighted,” Adams said.

“The government should use this episode as a wake-up call to accelerate efforts to repeal the Sedition Act and amend or repeal other laws restricting freedom of speech, including overly restrictive provisions of the Peaceful Assembly Act.”