Just not long ago, PTPTN policy and operations deputy chief executive Mastura Mohd Khalid told the media that PTPTN had borrowed money from the bank to fund 2.9 million students and the total bank loan amounted to RM51.2bn, with a very long repayment period. This is the amount that PTPTN used as capital to continuously provide loans to students. And it was also reported that the funds are currently short of RM39bn.

We are also concerned about the management of Lembaga Zakat: according to a study done by Norma Saad, professor, Department of Economics, Kulliyyah of Economics and Management Sciences, International Islamic University Malaysia, and Naziruddin Abdullah, professor, UniKL Business School, “Is Zakat Capable of Alleviating Poverty? An Analysis on the Distribution of Zakat Fund in Malaysia”, the biggest amount of expenditure goes to operations and management costs as opposed to the poor.

This move begs the questions: Why Kedah in particular? Is Lembaga Zakat Negeri Kedah running short of funds compared to other states? Is this related to the Bersatu annual general meeting that is happening tomorrow?

This is clearly a case of conflict of interest and abuse of power arising from political appointments tasked with dealing with government-linked funds.

In September this year, Wan Saiful made a RM100,000 contribution to Perlis flood victims under the PTPTN corporate social responsibility umbrella. Wan Saiful has also been recently appointed as Perlis Bersatu secretary. In light of the foregoing, what is the justification for this move, which clearly raises the issue of conflict of interest?

There has been a systematic conflict of interest perpetuated by the former BN government through political appointments in government agencies and government-linked companies. We note with concern the practice has continued to flourish under the current Pakatan Harapan government as seen in this PTPTN and other issues.

The PH government must address this issue immediately in moving towards a new Malaysia and in implementing its institutional reform agenda. It is important to note that the Pakatan Harapan election manifesto makes several references to appointments to key positions that should be based on merit instead of political links. 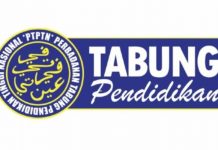 Imprudence must be blacklisted

PTPTN should be completely revamped. It has been abused, misused and wasted Tax payers money ending up in Debt. All previous Top Management should be held responsible and charged for failure.

He should donates with his money/salary not PTPTN fund.