The continuing phenomenon of elected representatives switching political allegiance is a cause of great concern, and the Malaysian Bar calls on the government to urgently consider enacting anti-hopping legislation that will restrict the ability of lawmakers from doing so.

The Malaysian Bar has, on several occasions, called for the urgent enactment of such laws as they are necessary to strengthen political stability and public confidence in the democratic process in the country.

We have consistently maintained that there is no prohibition for Parliament to legislate anti-hopping laws at the federal level. Article 10(2) of the Federal Constitution provides that Parliament may by law impose restrictions as it deems necessary or expedient in the interest of the security of the federation or any part thereof, public order or morality.

Unexplained defections and switching of political allegiances by elected representatives have greatly undermined the rakyat’s confidence in the political process and, if it goes on unchecked, will lead to voter apathy.

Switching parties or political allegiance after being voted in on a particular platform – depending on the particular circumstances of the case – could be viewed as a betrayal of the decision of the voters, and this is clearly an area where the power granted to Parliament by the Federal Constitution should be invoked.

Legislative action is required on an urgent basis to discourage and restrict such behaviour.

Remedies to the issue of party-hopping may require amendments to the Federal Constitution, in particular the removal of the disqualification provision in Article 48(6). This would allow a member of Parliament to resign his or her seat and recontest under a different political party and allow voters to decide on the party change.

Nonetheless, the enactment of anti-hopping laws to curb the problem of crossing the floor in state assemblies or the federal Parliament is the direction the country needs to move to and what all political leaders need to commit and work towards.

The Malaysian Bar calls upon the government and members of Parliament to resolve this issue for the good of Malaysian democracy, notwithstanding any immediate benefit that one side or the other may enjoy by the perpetuation of this practice. 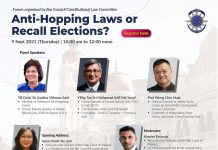 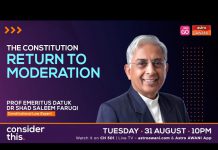