Today a crime was perpetrated in the middle of the sea, by order of the government of Israel and the IDF Command: a warlike attack against aid ships and deadly shooting at peace and humanitarian aid activists, says Israeli peace activist Uri Avnery.

It is a crazy thing that only a government that crossed all red lines can do.

“Only a crazy government that has lost all restraint and all connection to reality could something like that – consider ships carrying humanitarian aid and peace activists from around the world as an enemy and send massive military force to international waters to attack them, shoot and kill.

“Noone in the world will believe the lies and excuses which the government and army spokesmen come up with,” said former Knesset member Uri Avnery of the Gush Shalom movement. Gush Shalom activists together with activists of other organizations are to depart at 11:00 from Tel Aviv to protest in front of the prepared detention facility where the international peace activists will be brought.

Greta Berlin, the spokeswoman for the flotilla organizers located in Cyprus, told Gush Shalom activists that the Israeli commandos landed by helicopter on the boats and immediately opened fire.

This is a day of disgrace to the State of Israel, a day of anxiety in which we discover that our future was entrusted to a bunch of trigger-happy people without any responsibility. This day is a day of disgrace and madness and stupidity without limit, the day the Israeli government took care to blacken the name of the country in the world, adding convincing evidence of aggressiveness and brutality to Israel’s already bad international image, discouraging and distancing the few remaining friends.

Indeed, today a provocation took place off the coast of Gaza – but the provocateurs were not the peace activists invited by the Palestinians and seeking to reach Gaza. The provocation was carried out by Navy ships commandos at the bidding of the Israeli government, blocking the way of the aid boats and using deadly force.

It is time to lift the siege on the Gaza Strip, which causes severe suffering to its residents. Today the Israeli government ripped the mask of its face with its own hands and exposed the fact that Israel did not “disengage” from Gaza. Real disengagement from the area does not go together with blocking the access to it or sending soldiers to shoot and kill and wound those who try to get there.

The State of Israel promised in the Oslo Accords 17 years ago to enable and encourage the establishment of a deep water port in Gaza, through which Palestinians could import and export freely to develop their economy. It’s time to realize this commitment and open the Port of Gaza. Only after the Gaza port will be open to free and undisturbed movement, just like the Ashdod and Haifa ports, will Israel really have disengaged from the Gaza Strip. Until then, the world will continue – and rightly so – to consider the Gaza Strip under Israeli occupation and the State of Israel as responsible for the fate of the people living there. 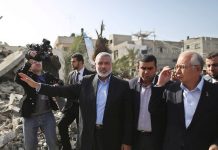 Israel–Palestine conflict needs to be redefined