The Malaysian Bar is dismayed and saddened to learn about the death of 21-year-old Surendran Shanker, who died after being held in Simpang Renggam prison.

It pains us that another death has occurred, shortly after the tragic deaths of A Ganapathy and Sivabalan Subramaniam in the past few weeks.

Firstly, the Malaysian Bar calls for an immediate and thorough independent investigation of Shanker’s death via an inquiry or inquest, as mandated under Section 334 of the Criminal Procedure Code. This unacceptable number of deaths in custody is a stain on our country, and there needs to be an urgent overhaul of the system as a matter of utmost priority.

This spate of deaths is macabre, and its frequency may send the wrong message that there is a lacuna of accountability by the authorities towards the detainees in their care. There is much public outrage due to the current state of affairs, which may lead to an erosion of public confidence towards the authorities and the government, and something must be done to correct this situation and perception.

Secondly, the Malaysian Bar urges the government to introduce a Coroners Act to thoroughly investigate each and every death in custody. The role of coroners should be strengthened so that greater clarity can be provided in the inquiry process. Deaths in custody are an affront to civil society and to natural justice, and such tragedies must be prevented from happening in the future. The Malaysian Bar wishes to be consulted on this matter and is ready to assist to ensure that an effective and comprehensive Act is implemented.

Justice must not only be served, but must be seen to be served. 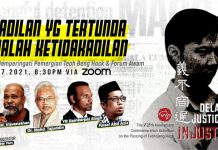 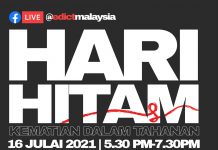