Among the issues discussed at the dialogue session, held at the Aliran office in Penang last night, were the Allah controversy and the Kajang Move.

Mujahid was accompanied by a small team, mainly Penang Pas members, including several from the party’s non-Muslim wing.

A frank discussion of the recent developments concluded that the way of dialogue and bridge-building has to continue. 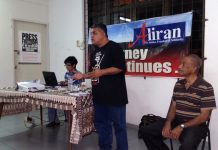 Seeking moderation in a troubled Malaysia