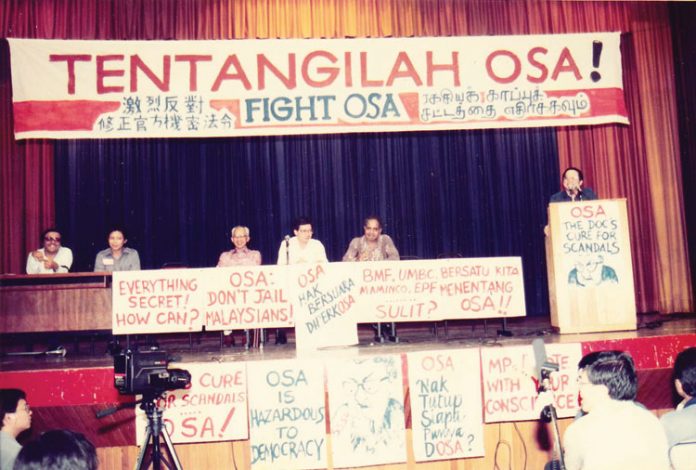 The OSA is an archaic law which grants excessive powers to ministers and public officers to arbitrarily classify almost any government document as an “official secret”. The punishment for communicating an “official secret” can reach up to seven years imprisonment, which is severely punitive in nature.

The OSA was regularly abused by the previous government to persecute opposition figures and civil society activists. Notably, former Pandan MP Rafizi Ramli was charged under the OSA for leaking a page of the 1Malaysia Development Bhd (1MDB) audit report.

Maintaining the OSA in its current form runs contrary to the principles of transparency and freedom of information – which directly undermines accountability and good governance. Without adequate access to information about government policies, the citizenry cannot make informed decisions. Lack of informed decisions inevitably lead to incompetent or worse, corrupt governments.

This is also a breach of Promise 14 of Pakatan Harapan’s manifesto, which states that the new government would revise the OSA and enact a Freedom of Information Act. Keeping the OSA in our statute books is also inconsistent with Pakatan Harapan’s laudable commitment to instil integrity in governance through the establishment of the Special Cabinet Committee on Anti-Corruption and the Centre on Governance, Integrity and Anti-Corruption.

It would also be an anomaly for two Pakatan Harapan state governments – Selangor and Penang – to have freedom of information legislation; yet the federal government chooses to adopt a conflicting position.

Hakam hereby urges the government to abolish the OSA and to enact a freedom of information act in its place.

Lim Wei Jiet is secretary-general of Hakam. This statement was issued on behalf of the Hakam executive committee.