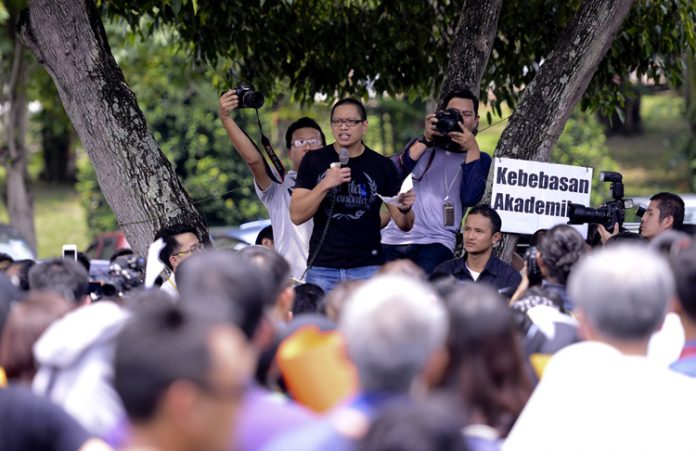 This “reminder” is an affront to academic freedom and prevents academics from doing their jobs, says Azmi Sharom.

The University of Malaya Integrity Unit which is part of the Vice Chancellor’s Office recently released a “reminder” to students and staff forbidding us from making any public statements.

It states that we can’t speak, write, or distribute any public statement that:

A public statement is defined by them as any statement to the press, general public, in lectures, public speeches, broadcasting and publications (including on social media).

The University of Malaya Academic Staff Union (PKAUM) is appalled at this “reminder”. It is reflective of a university management that does not understand at all that one of the purposes of academia is to view critically the society within which we live. This includes the government and our own universities. This prohibition is a direct and literal interpretation of the Act 605 Statutory Bodies (Discipline and Surcharge) 2000, which inhibits university citizens from executing their obligation as a public conscience.

If academics and students were to comply with this repulsive and obtuse “reminder”, we will not be able to carry out and disseminate any sort of research which involves the government. The social sciences, economics, business, law, public health, engineering, to name but a few departments, are involved with work that by its very nature involves critical study of government policies and decisions.

The wording of the “reminder” expressly forbids us from speaking to the general public. Yet we have a responsibility to disseminate our findings, thoughts and ideas to the world at large, lest we be detached from the society we live in. If this was the case, then we will truly be living in ivory towers providing no value whatsoever to the community.

However, the wording of the “reminder” is vague enough that it may also include academic publications and presentations (to conferences and the like) as well as ordinary university lectures.

It is interesting to note that there are eight statutory bodies which are excluded from this Act 605, which strangely do not include institutions of higher learning!

This “reminder” by the Integrity Unit is an affront to academic freedom; it prevents us from doing our jobs; it is a breach of our freedom of expression (guaranteed by the Federal Constitution!) and it will go a long way in ensuring that our university is not worthy to be described by that name.

The PKAUM demands that the office of the vice chancellor retract this “reminder” immediately. We also demand a thorough review of the Universities and University Colleges Act as well as the Statutory Bodies Discipline and Surcharge Act which oppresses both students and academic staff.

The general public knows that dissenting views are not harmful, but instead they are a healthy democratic initiative. It is time the executives and the senior administrators realise that too.

Azmi Sharom is president of the University of Malaya Academic Staff Union (PKAUM).

Why UUCA must go: Academic freedom is key to quality education

If this ‘reminder’ is obeyed by its staff as well as its students, UM might not be trusted, let alone not respected at all by anyone in the world.