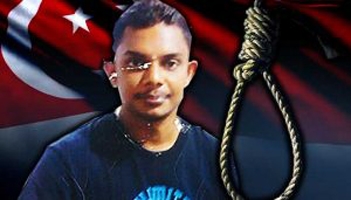 Malaysians Against Death Penalty and Torture (Madpet) calls on Singapore to stop its plans to execute Malaysian citizen Prabagaran Srivijayan on Friday, 14 July 2017.

Prabagaran was convicted and sentence to death by Singapore for the offence of drug trafficking. There are concerns that he was not accorded a fair trial.

There is an application now pending at the Malaysian Court of Appeal to refer Singapore to the International Court of Justice (ICJ) for breach of the right to a fair trial.

Last March, the Malaysian High Court denied the application for leave for a judicial review to compel Malaysia to intervene by referring Singapore to the ICJ. That means that this judicial review has not even been heard on the merits. Justice demands that Prabagaran not be executed until this court application is heard.

Singapore will not lose anything by simply postponing the execution, better still commuting the death penalty to imprisonment.

As such, for Singapore to execute this Malaysian at this stage – it may be said to be an act of disrespecting not only the Malaysian courts and Malaysia, but also be an affront to justice to execute before the convicted is able fully exercise all available legal options. To now continue with a speedy execution will also raise the presumption that Singapore may be fearful that the ICJ may indeed confirm that Prabakaran was denied a fair trial.

Whilst Singapore may have amended its laws, making it a possibility that those convicted of drug trafficking not to be sentenced to death, there are serious flaws in this new current law.

To escape the death penalty, the accused needs to satisfy two conditions:

Thus, without the Attorney General Chamber’s certificate, the judges in Singapore cannot exercise their discretion when it comes to sentencing, and will have no choice but to sentence the convicted to death.

Hopefully, Malaysia will not make a similar mistake when it abolishes the death penalty, and would always ensure that only judges will be vested with the discretion when it comes to sentencing.

To compound matters, the denial of access of lawyers to Prabagaran in the Malaysian court actions is unacceptable and against human rights (Malay Mail, 7 July 2017).

Madpet calls on Singapore to immediately postpone the planned execution of Prabakaran until he has fully exhausted all his legal options in Malaysia and Singapore, and maybe even the ICJ;

Madpet also call for Prabakaran’s death penalty to be commuted;

Madpet calls on Singapore to amend its laws, returning discretion to judges when it comes to sentencing. The provision in law about the requirement of a ‘certificate of substantive assistance’ by the Attorney General’s Chambers, before the convicted becomes entitled to a sentence other than death penalty, must be repealed.

Madpet also urges Prime Minister Najib Razak and the Malaysian government to speedily act to save the life of this Malaysian. Malaysia should also withdraw its objections, and allow the judicial review to be heard on its merits by the court.

Maadpet also calls on both Singapore and Malaysia to abolish the death penalty and immediately impose a moratorium on all executions.

Charles Hector released this statement on behalf of Malaysians Against Death Penalty and Torture (Madpet).