Miri – The draft pre-proposal for a community-initiated land and environmental conservation initiative in Ulu Baram was lauded by the Sarawak Forestry Department, reports Save Rivers.

Forestry Department director Sapuan Ahmad received the document from the community in a simple handover ceremony at a leading hotel in Miri on 18 February 2017. The handing over was also attended by representatives from Save Rivers lead by the chairman Peter Kallang and the Keruan Organisation led by its chairman, Komeok Joe.

The proposed area is located in the north-eastern part of Sarawak, mostly in the Upper Baram region while some small parts belong to the sources of the Tutoh and Akah rivers. The affected population of more than 4,000 people from 32 villages within the area are from the Sarawak Orang Ulu ethnic groups of Penan, Kenyah, Saban and Kelabit.

The approach proposed for the affected area is for a co-management strategy, under which the villagers and the government will work together for sustainable development and conservation.

The proposed zone covers 283,500 hectares; 28 per cent of the area (79,000 hectares) is still covered with primary forest, which is proposed to be protected as a core zone while 23 per cent of the area is previous and current agricultural land, which is classified as an agriculture zone. The remaining 49 per cent is classified as a buffer zone dedicated to sustainable development, conservation and forest restoration projects, creating local income and socio-economic development.

Commenting on the draft pre-proposal, Sapuan said, “At the department level, we welcome and support the proposal and we will study it. After that, we will give you feedback on it, and we can assist where it is appropriate. I suggest that you give your final proposal by the second half of this year.”

Komeok Joe, who is just back from leading a team from the forestry department to the proposed areas, said he was happy to see the positive response from the government and hopes that the proposal will be approved speedily. He added: “This is the wish of the people from the areas and it is for the people… they are made up from various indigenous groups. It is for everyone’s good.”

Peter Kallang from Save Rivers commented: “This approach allows conservation and sustainable development to be achieved. It is focused on three main aspects, which are social, economy and the environment.”

Based on the definition by the World Commission on Environment and Development, sustainable development is “development that meets the needs of the present without compromising the ability of future generations to meet their own needs.” 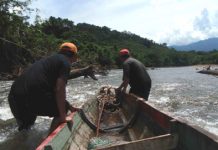